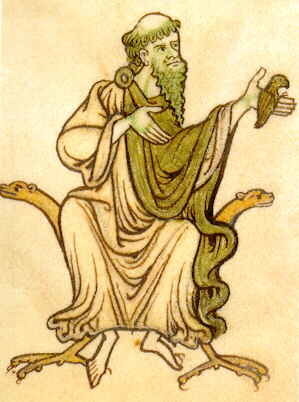 Kevin was of noble birth, born in 498 CE, and just as he was about to be baptised by St Cronan of Roscrea, an angel appeared to his parents, saying that he should be given the name Coemgen (Kevin in English), meaning fair-begotten. He was the first ever to be given this name.

Even as a child miraculous events were part of Kevin’s life. During his infanthood, a white cow appeared at his parent’s house every morning and evening, supplying milk for him. When Kevin was old enough, he was sent to tend the sheep. One day some poor men begged him to give them some sheep. He was moved by their poverty and gave them four sheep. When he counted his flock in the evening, however, the full number were there.

Kevin was a pupil of St Petroc of Cornwall from the age of seven, and lived with monks from the age of 12. He studied for the priesthood, and following his ordination, Kevin lived as a hermit in a partially man-made cave which he was led to by an angel. This cave is now known as St Kevin’s Bed. The cave, about 10 metres above the lake, measuring just 1.5 metres wide and 1 metre high, was difficult to access through a tight passageway. It is assumed that he used the cave for prayer and sleeping only.

Kevin lived close to nature with the birds and animals as his companions for seven years. During this time he went barefoot, wore only animal skins, slept on stones and ate sparingly of nettles and herbs. His time was spent in prayer, and soon disciples were attracted to Kevin as a holy man, resulting in a settlement being built beside the lake enclosed by a wall, called Kevin’s Cell. After his community grew into a seminary of saints and scholars, with several other monasteries, Kevin again withdrew into solitude, only returning to his original monastery after four years to live a life of praying, fasting and teaching until his death on 3rd June, 618 at the age of 120.

The monastic settlement at Glendalough grew to become one of the great spiritual centres of Christianity in Ireland, flourishing for a thousand years after St Kevin’s death. St Kevin of Glendalough is known for his journey from solitude to community.

The most familiar story of St Kevin is represented in depictions of him with a blackbird on his outstretched hand. The story goes that during Lent, as Kevin held out his arms in prayer, a blackbird built a nest in his hand and laid an egg in it. He remained in that position until the baby bird had hatched and the fledgling left the nest. This story is told in a famous poem by Nobel prizewinner Seamus Heaney.

·       Kevin would sometimes stand in the cold waters of the lake reciting psalms keeping vigil and in penitence, as was the practice for the Irish saints. On one occasion he dropped his psalm book in the lake, but it was returned undamaged to him by an otter.

·       In a time of drought, Kevin was able to feed his monks with salmon brought to him each day by an otter, but when one of the monks thought to make gloves out of the otter’s pelt, it never returned.

·       A young man with epilepsy had a vision that he would be cured by eating an apple. As there were no apple trees in the vicinity, Kevin ordered a willow tree to produce apples, and 20 apples appeared on the tree.

Here is a link to Seamus Heaney Reading his poem 'St. Kevin and the Blackbird'.

Here is a Summary of St Kevin from the Catholic Irish Church.

This Article names Kevin as 'The Birdman of Glendalough' from the Irish Times.

The Community of Hope have created this page to honour his story.

The Orthodox Fellowship of the Transfiguration has celebrated Kevin's ecotheology on this page.

The Abby of the Arts Community shared this 'love note from your online abbess' about Kevin.

And the Irish Culture and Customs site has named him as the founder of Glenalough.

This page was curated and put together by Fleur.