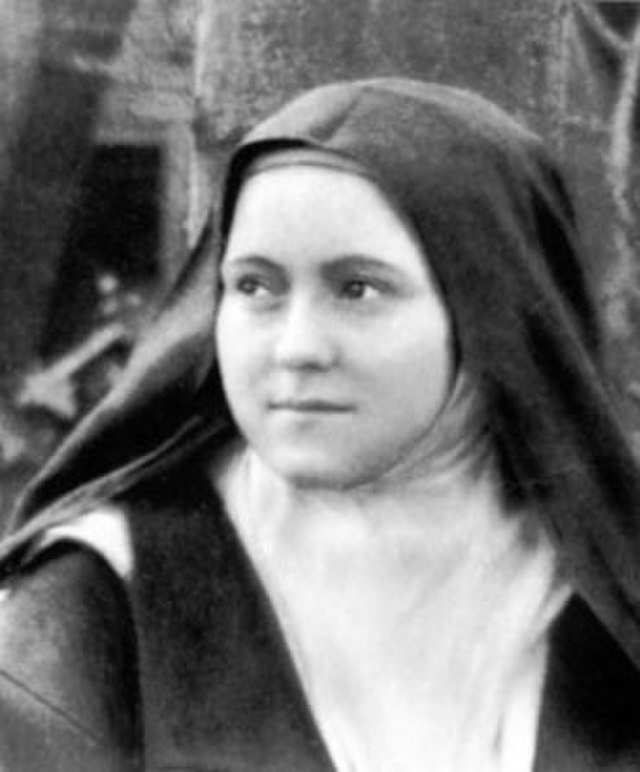 Born Marie Françoise-Thérèse Martin in Alençon, France on 2 January, 1873, the daughter of a devout Catholic couple. Therese was a sickly child from birth. Her mother died when she was 4, and her older sister who became responsible for caring for her, entered a convent within a few years. Therese became seriously ill, but prayed and had a vision of Mary and was healed. She continued with her internal prayer life. Her other older sisters also left to join convents, but Therese was particularly small and immature, and when her turn came, the superior of the convent refused to take her.

Her father took her on a trip to Rome for an audience with the Pope. Although forbidden to speak to him, she begged for him to let her join the Carmelite convent! He was impressed with her determination, and she was admitted to the convent where two of her older sisters were already nuns. Therese’ eldest sister became prioress and there was a concern that the family was dominating the convent, so Therese was asked to remain a novice. She finally took the habit on 10 January 1889. After their father’s death in 1894, the youngest sister also entered the same convent. Therese accepted the hardships of her status gladly, and as a Carmelite, the restriction on not being able to do “good deeds”.

In 1896 at the age of only 23, Therese began to cough up blood. She had already started writing down her memories in a journal and she continued during her illness, believing that it may help those on earth after her death. She died on 30 September, 1897 at the age of 24 from tuberculosis. Her sister Pauline, the former prioress put together Therese’s writings and distributed them to other convents. Her “little way” of trusting in Jesus to make her holy and relying on small daily sacrifices rather than great deeds appealed to many who were trying to find holiness in their ordinary lives.

“Jesus, help me to simplify my life by learning what you want me to be and becoming that person.”

“Remember that nothing is small in the eyes of God. Do all that you do with love.”

“Our Lord does not look so much at the greatness of our actions, or even at their difficulty, as at the love with which we do them.”

“A word or a smile is often enough to put fresh life in a despondent soul.”

“I (pray) like children who do not know how to read, I say very simply to God what I wish to say, without composing beautiful sentences, and He always understands me.”

“I should be distressed that I drop off to sleep during my prayers and during my thanksgiving after Holy Communion. But I don’t feel at all distressed. I know that children are just as dear to their parents whether they are sleep or awake and I know that doctors put their patients to sleep before they operate. So I just think that God “knows our frame; he remembers that we are dust.”

“After my death, I will let fall a shower of roses. I will spend my heaven doing good upon earth. I will raise up a mighty host of little saints. My mission is to make God loved.”

The Carmelites at Lisieux offer all of her works digitally at this page: Works of Therese 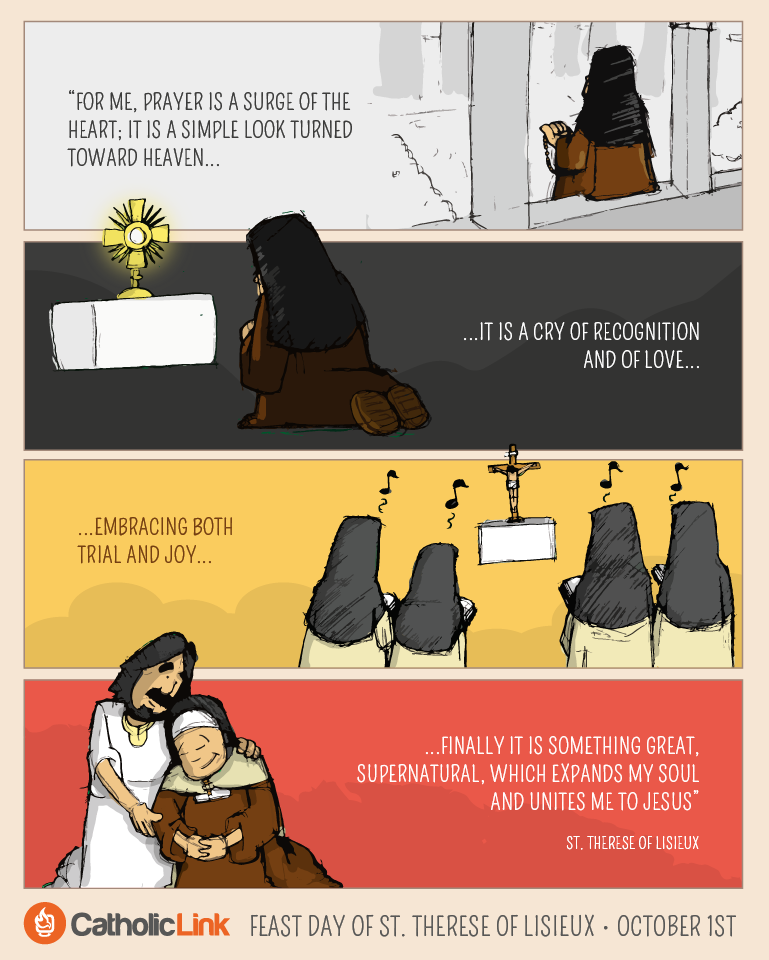 This site holds a range of resources, including records of the move to recognise Therese as a Saint, her story, writings and spirituality and references to other sources.

Here is a Video talk by Joe Heschmeyer, seminarian for the Archdiocese of Kansas City in Kansas, on The Spirituality of St. Thérèse of Lisieux, the Little Flower