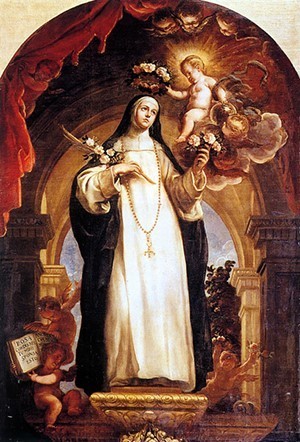 Isabel Flores de Oliva was born to Spanish colonists on April 20, 1586, in Lima, Peru. She was said to be exceptionally beautiful, and as a child a servant had a vision of her face turning into a Rose, so she was nicknamed Rose, a name that she took at her confirmation in 1597.

From an early age Rose understood redemptive suffering, praying, fasting and performing secret penances, some of which were severe. She clearly wished to pursue a religious life, and when she started to attract male attention because of her beauty, she cut her hair and rubbed pepper on her face causing it to blister.

Her parents wanted her to marry and opposed her plan to enter a religious order, initially refusing to allow her to take a vow of chastity.  Finally, Rose’s father gave her a hut in the garden where she could live separate from the family. Here she remained, spending long periods in prayer, sometimes sleeping only two hours per night, and refusing to eat any meat. She helped homeless children, the elderly and the sick, bringing them to her room to care for them. Rose also took flowers that she grew to the market to sell to help her family who had fallen into financial difficulties. She also made fine lace and embroidery which she sold to care for the poor.

Other than this, she only left her room to attend church. At the age of 20 she was allowed to join the Third Order of St Dominic, taking a vow of perpetual virginity and continuing her life of extreme prayer, fasting and penance, while living in her hut in silence and seclusion in the family garden. She wore a thick circlet of silver on her head, studded on the inside, in the way of Christ’s crown of thorns.

Rose suffered from arthritis and asthma, and experienced spiritual dreams.  Rose lived this way until becoming ill for the last three years of her life, ending with her death on 24 August 1617, at the age of 31. Her purported last words were: “Jesus, Jesus, Jesus, be with me always”.

She is remembered for having a love of God so ardent that it withstood ridicule and for her asceticism. When she died, the city turned out for her funeral, and prominent men took tuns carrying her coffin. Even the Spanish Inquisition Interrogators had decided that she was influenced by grace. The rich and poor of Lima alike knew and loved Rose, as did the foreigners and natives, too.  She is the patron saint of embroiderers, gardeners, florists, those who suffer ridicule for their piety, and those who suffer family problems.

“Apart from the cross, there is no other ladder by which we may get to heaven.”

“If only mortals would learn how great it is to possess divine grace, how beautiful, how noble, how precious. How many riches it hides within itself, how many joys and delights! No one would complain about his cross or about troubles that may happen to him, if he would come to know the scales on which they are weighed when they are distributed to men.”

The Franciscan Media page offers a great short reflection as well as a summary of St Rose's life.

Here is a fun article Who Is St. Rose of Lima? 8 Facts About Patron Saint of Peru And Latin America

The Catholic Online site has a Saints Page for St Rose