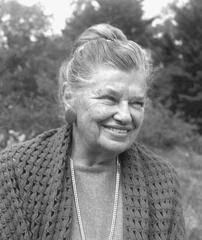 Born Ekaterina Fyodorovna Kolyschkine on August 15, 1896, in Nizhny Novgorod, Russia, she was born into the minor nobility and baptised into the Russian Orthodox Church in St Petersburg as an infant. During her schooling in Alexandria, Egypt, where her father was a diplomat, she was exposed to the Catholic Church. After returning to St Petersburg, she married her first cousin, Boris de Hueck in 1912.

Early in WW1, Catherine served as a Red Cross nurse and was decorated for bravery under fire, while Boris served as an officer. As Russia collapsed they returned to St Petersburg but were forced to flee, they living as refugees in Finland until they were able to make their way to England.

Catherine was received into the Catholic Church in 1919 before emigrating to Canada with Boris. In Toronto she gave birth to their only child in 1921, and the marriage between her and Boris ended in the 1930s.

Catherine was asked to do a well-paid lecture tour speaking on pre-revolutionary Russia, which she agreed to. Her talks were popular across Canada and the United States. After coming to an understanding of the teachings of the Bible as taught in the Catholic Church, she became troubled by her prosperity and in 1932 was challenged to give up all her possessions and work among the poor. Initially this began in Toronto with a shelter for the homeless, meals for the hungry, recreation and books for the young, and a newspaper to spread the social teachings of the Church. This ministry, Friendship House Apostolate, grew from Toronto to include another Friendship House interracial charity centre in Harlem, New York which not only distributed goods to the poor, but also promoted racial understanding through talks and discussions. This work expanded into Chicago, Washington D.C. and Portland Oregon.

Following the annulment of her first marriage, which was forbidden by the Catholic Church due to their first cousin relationship, Catherine married an American, Eddie Doherty in 1943. In their retirement, Catherine and Eddie moved to Combermere, Ontario in 1947, where once again she worked with the poor, establishing the Madonna House Apostolate.

Doherty's spirituality is summarised in what she called The Little Mandate — words which she believed she received from Jesus Christ and which guided her life.

"Arise — go! Sell all you possess. Give it directly, personally to the poor.

Take up My cross (their cross) and follow Me, going to the poor, being poor, being one with them, one with Me.

Preach the Gospel with your life — without compromise!

Listen to the Spirit. He will lead you..

Do little things exceedingly well for love of Me.

Love... love... love, never counting the cost Go into the marketplace and stay with Me.

Be a light to your neighbour's feet.

Go without fear into the depth of men's hearts. I shall be with you.

Pray always. I will be your rest. "

Another of Catherine’s themes was the duty of the moment.

Catherine also introduced the concept of poustinia to Roman Catholicism. A poustinia is a small, sparsely furnished room where a person goes to pray and fast alone in the presence of God for 24 hours.

Catherine De Huek Doherty is known as a Russian-Canadian social worker who established the Madonna house in Ontario and who lived a radical Gospel centred life of service.

Here is the Madonna House website which continues the ministry work she began.

Here is a video of Catherine speaking on Unity in the 60's.

Here is the wikipedia page which has the story of her life.