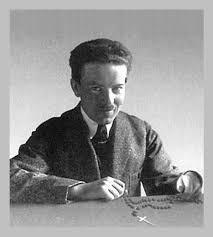 You never know what your particular ‘yes’ to God can do:  Maybe transform a family, a community, a parish.  Maybe lead someone else to the Faith. Maybe introduce the healing journey to a wounded heart.  Or maybe, just maybe—form the soul of a future pope.

In the middle of the madness of Nazi-occupied Poland, with priests sent to concentration camps and youth in desperate need of connection and spiritual nourishment, a simple tailor with a mystical bent volunteered to step into the breach and lead youth ministry at his parish.  Jan Tyranowski’s simple holiness, genuine love, and zeal for the Lord would prove transformative to a young student-worker there named Karol Wojtyla.  The future John Paul II would be introduced to the writings of St. John of the Cross by this unassuming layman—and from that point on, his personal spirituality would take on a particularly Carmelite charism.

Julie Onderko writes for the Catholic Exchange in this article on Jan:

As priests were carted off by the Gestapo during the oc­cupation of Poland in World War II, Jan Tyranowski, a tailor by trade, reluctantly stepped into unknown territory. He was asked to form and advise a group of young men, creating a youth ministry team for the young people of the parish. “Living Rosary” prayer groups were born from the undertaking. These groups, led by Tyranowski and his team members, provided the sorely needed spiritual, emotional, and practical support to young Poles through prayer, fellowship, and practicing the works of mercy.

At first glance, one might dismiss Jan Tyranowski, thinking the shy tailor would not be suited for youth ministry. In his rather reclusive lifestyle, he did not deal much with people. Jan was not at all attracted to the youth — the idea of speaking to them terrified him. Initially, they were wary of him as well; many of the young people of his parish thought he was peculiar.

Well, he was a mystic and that can qualify one as “peculiar.” And he was rather eccentric and quite intense. But he was also devoted to the Virgin Mary and a student of Carmelite spirituality. Indeed, Jan possessed something very real and very needed — a connection with the Divine. This simple tailor was a gift from God to the Polish youth whose future was being torn from them by the Nazi war machine.

When Jan protested, he was told, “Do not be afraid, the Lord will help you.” The Lord blessed his efforts, and Jan was able clandestinely to bring together the team leaders and implement the Living Rosary groups that served as a lifeline for the young people suffering under the Nazi occupation.

Pope John Paul II credited Jan with helping him recognize his vocation. St John Paul wrote of his mentor: “He was one of those unknown saints, hidden amid the others like a marvelous light at the bottom of life, at a depth where night usually reigns. In his words, in his spirituality and in the example of a life given to God alone, he represented a new world that I did not yet know. I saw the beauty of a soul opened up by grace.” Pope John Paul II declared Jan Servant of God in 1997 and Pope Francis declared him venerable in 2017.