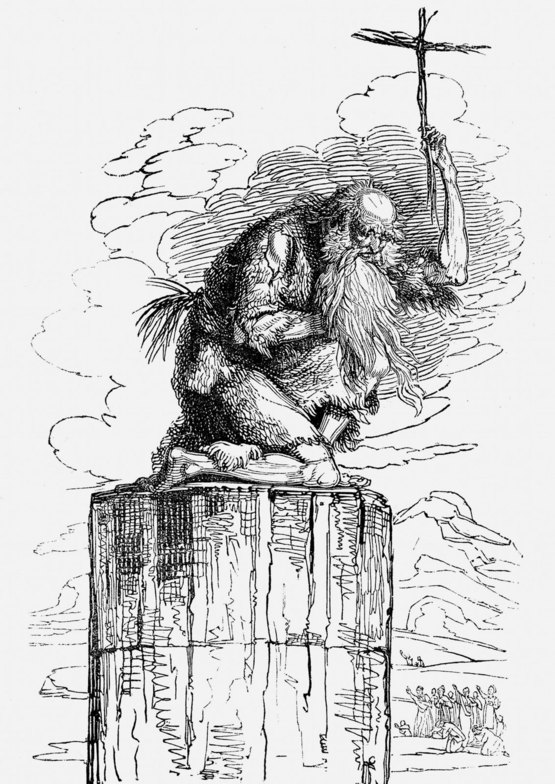 Simeon was born in Syria to a Cappadocian shepherding family in the 3rd Century. He came to faith as an early teen and was moved to Baptism by a reading of the Beatitudes. He joined a monastery but it became apparent that his rigorous piety and hermetic practices meant that living separately to the community was better for him and his fellow monks.

He lived close by to the town but his holiness drew crowds of people to consult him which prevented him from observing the solitude he needed to be close to God. He then built himself a pillar and lived atop it for 37 years. He was still in contact with the community with afternoons spent in conversation with those who climbed a ladder to speak with him. The young boys of the village were said to climb the pillar with provisions for Simeon and he refused to come down for medical treatment even when he was unwell.

Among his devotional routines was a physical cycle of prone and standing prayer positions, which is attributed to have enabled him to stay on top of the pillar for so long. He inspired many others to adopt a similar lifestyle or practice of retreating to high places in order to commune with God and become an example of prayerfulness for the surrounding community. He is celebrated as the first "pillar saint" and we celebrate him as a faithful holy hermit who inspires us to climb higher as we reach for God.

Here is an article on Simeon from Britannica.

This is the Wikipedia page with more details of his life.

Here is the Contemplative prayer service, Reaching for God with Simeon Stylites, which Simeon inspired us towards for January 2022.