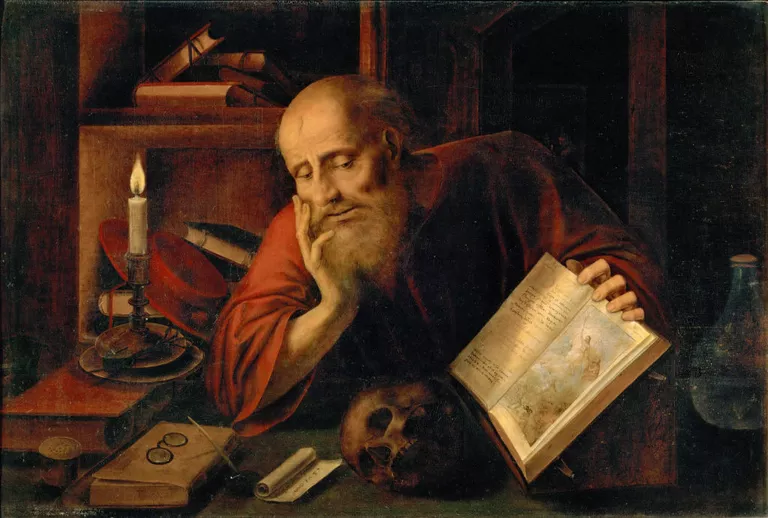 Eusebius Sophronius Hieronymus was born around 342 CE in Stridon, Dalmatia, in what would now be Croatia or Slovenia. He was well educated in Latin and Greek, and raised in a Christian family, but pursued an immoral lifestyle in his youth, yet experiencing guilt afterwards for his behaviour.

He did have a Christian friend and influence, and in 366, Jerome became a Christian and was baptised by Pope Liberius. He became interested in matters of faith, and entered a monastery. He spent time in various monasteries, translating books because of his skills in Latin, Greek, Hebrew and Chaldaic. He finally arrived in Antioch in 374, where he started to write his first work ‘Concerning the Seven Beatings’.

Jerome became ill, while some of his other companions died. During his illness he had visions, which increased his religious fervour. He went to live as a hermit in the desert southwest of Antioch for several years, during which time he was frequently ill.  When he emerged from his hermitage, the Church officials at Antioch put pressure on Jerome to be ordained, which he did not want, desiring a monastic life, but eventually he relented, on the proviso that he would not be expected to serve in ministry.

With more freedom as a priest, Jerome travelled to Rome, working as a secretary to Pope Damasus and promoting asceticism to everyone around him, including women who wanted to live saintly lives. On the death of Pope Damasus, Jerome’s innovative ideas became unpopular and he left Rome for the Holy Land, eventually settling in Bethlehem, where he had a monastery and dormitories for women. The widow Paula and her daughters, and several other followers from Rome met him in the Holy Land and joined him in his endeavours. Paula died in 404, with Jerome following on September 30, 420.

Jerome is best known for his translation of the Bible from Hebrew and Old Latin.

He is particularly important for having made the core of the accepted Latin translation of the Bible known as the Vulgate.

He also wrote defending the virginity of Mary, and engaged in debates on several other heresies of the time.

He had an opinion on whether marriage and virginity should be viewed as equally righteous in Adversus Jovinianum, and defended monasticism and celibacy in Contra Vigilantium.

One of the people he corresponded with was St Augustine. St Augustine said of him, “What Jerome is ignorant of, no mortal has ever known.”

Prayer for Christ's mercy by Jerome

O Lord, show Your mercy to me
and gladden my heart.
I am like the man on the way to Jericho
who was overtaken by robbers,
wounded and left for dead.
O Good Samaritan, come to my aid.
I am like the sheep that went astray.
O Good Shepherd, seek me out
and bring me home in accord with Your will.
Let me dwell in Your house all the days of my life
and praise You forever and ever with those who are there.

Here is an extra video St Jerome: Can A Saint Be Cranky

The Catholic Online site has a lot more information on his life and legacy.

There is an audio story to listen to at the Franciscan Media page.

Here is a A LETTER BY ST. JEROME TO NICEAS

Here is a full record of his prolific writings: The Principal Works of
St. Jerome