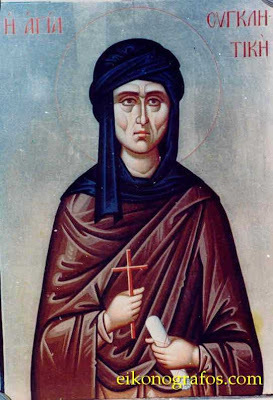 Syncletica is known as one of the holy Desert mothers from the 4th century. Born into a wealthy family, she was well known for her beauty but felt called to live in solitude and gave up all her wealth and position to retreat. She lived in a crypt in Alexandria, with her younger blind sister for years, devoting herself to spiritual practice and prayer. She was eventually sought out by people who had learnt of her holiness and wanted to get closer to God and ended up teaching other women in particular how to live in communion with God.

There are many of her sayings recorded in the Apothegmata Patrum (sayings of the desert fathers).

Here are two of those sayings:

"There are many who live in the mountains and behave as if they were in the town, and they are wasting their time. It is possible to be a solitary in one's mind while living in a crowd, and it is possible for one who is a solitary to live in the crowd of his own thoughts."

“In the beginning there are a great many battles and a good deal of suffering for those who are advancing towards God and afterwards, ineffable joy. It is like those who wish to light a fire; at first they are choked by the smoke and cry, and by this means obtain what they seek (as it is said: ‘Our God is a consuming fire’ [Heb. 12.24]): so we also must kindle the divine fire in ourselves through tears and hard work.”

Here is a short article from the CBE on her life called A Desert Mother: Amma Syncletica

Another short saying of Amma Syncletica: “Just as the most bitter medicine drives out poisonous creatures so prayer joined to fasting drives evil thoughts away.”

Here is a youtube video podcast excerpt of the Sayings of the Desert Fathers audio book which reads her sayings aloud.

Here is a fantastic academic article published in 1993 by Mary Forman called Amma Syncletica: A Spirituality of Experience which includes this excerpt from translator Castelli about Amma Syncletica's life:

Just as people who are about to make a journey first give thought to their provisions, just so she, having prepared herself with provisions – with long sufferings – she made the journey toward heavenly things without restraint. For, having put away beforehand the things for the completion of the house, she made herself the most secure tower. And whereas the work of dwelling places is usually constructed from external materials, she did the opposite thing. For she did not bring with her external materials, but rather she poured out internal things. For having distributed her property to the poor, and having renounced anger and memory of past injuries, and expelled envy and love of fame, she built up her house upon the rock from which the tower was splendid and the house free from storms (§13)19 Castelli, pp. 271-272. The translator rightly identifies the biblical image used here: the tower from Lk 14:28. However, the house built on rock which can withstand the storm is from Mt 7:24-27. Apohthegmata Patrum