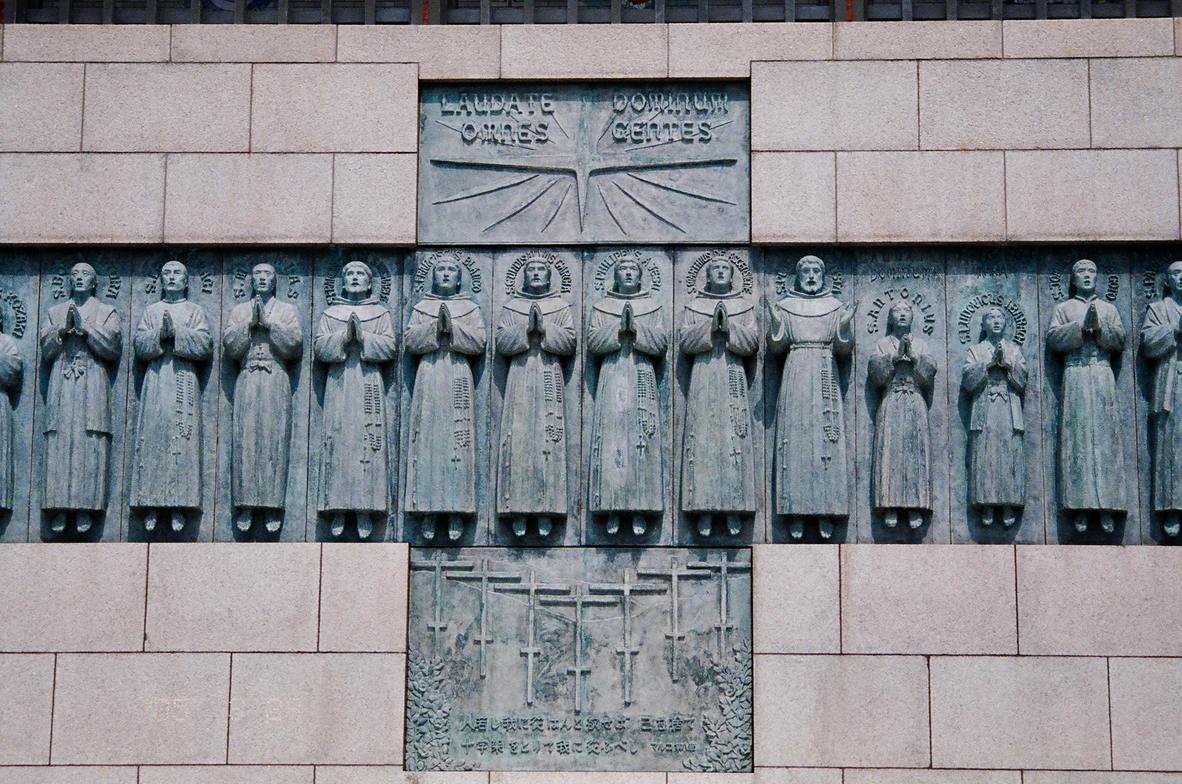 We mark All Hallow Tide with two services of particular rememberance and thanksgiving for the communion of saints and the eternal rest of our dearly departed ones.

We are invited to remember our loved ones, who have gone home to God ahead of us, in a memorial component to the service.

We will then follow this in place of our usual devotions with a Spiritual communion and agape feast, using the preface for All Saints day (1st Nov).

So please send in pictures and dates of your dearly departed ones for remembering, and come prepared to share a meal in the after-worship space.

You could make some soul cakes to enjoy or pumpkin muffins and even mix yourself a cocktail or mocktail to celebrate the feast over the screen.

We will draw ourselves into reflection on the communion of Saints and give thanks to God for the promise made to us in the new covenant - that one day we will join the heavenly host and remain in God's peace for eternity.

Please feel welcome to bring a candle along to the contemplative service and maybe make your own preparations for providing hospitality to trick-or-treaters outside your home (see below).

Some learning for us all

Why are we celebrating this festival - it's pagan and materialistic isn't it?

Sometimes we Christians have avoided celebrating Halloween (All Hallows Eve - a hallow is a Saint), maybe for reasons of concern around historical pagan traditions or becasue we don't want to support the growing commercialism that drives people to 'buy in' to holidays.
But are we missing a trick? As Christians, we shouldn’t be afraid to acknowledge darkness and evil. At Halloween (31 October) or ‘All Hallows’ Eve’, the night before All Hallows Day when Christians remember saints who have died, we have a unique opportunity to explore fear and death from a Christian perspective.

Christians can be wary of making light of dark matter – feeling it somehow gives evil a foothold. But what if the opposite is true? Could laughing at what is meant to scare us be the best way to strip it of its power? By putting on an event at Halloween that acknowledges darkness and the reality of death, we make space for us all to face fears around death and find reassurance that God is greater, and that darkness will never extinguish God’s light.

A bit more about Saints

In the Bible, 'saints' is another word for Christians, or followers of Jesus. So, today, all of us who follow Jesus can be called saints. In some churches, the phrase 'The communion of saints' is used. This talks about the way that all Christians – both those who are alive now and those who have already died – belong together in God's kingdom. Later on in history, the word 'saint' came to be used of people who were especially holy. Many of our Holy Hermits are recognised as Saints.

Our featured Holy Hermit Julain of Norwich (who is a Saint herself) says this about Saints:
"We know these saints stories, we know that they sinned during their lives on Earth, and yet we do not think less of them, for we know that in the end, all was turned to their eternal benefit and worth." To be holy and live as a saint does not mean to be without sin - but rather to live in close relationship with God, something we are called to strive for together in community.

The origins of Halloween

In the wake of influences from eager retailers, Halloween has become a dominant festival over recent years. There are a variety of Christian responses to its rise, mostly centred around concerns about celebrating evil. But is this the only way to understand Halloween? Maybe by learning something of the origins of the festival and its relationship to All Saints Day (1 November) we can reclaim it positively rather than denouncing it.

Was Europe ever really Christian?

Most European Christian festivals have their roots in pre-Christian beliefs. Anton Wessels in his book Europe: Was It Ever Really Christian? explores these beliefs and their relationship with Christianity. He points out that in all places at all times the Christian faith has interacted with culture and the lived experience of people. We think our 'brand' of Christianity is pure, but it isn't and never could be. We all exist in time and culture and cannot separate experience from faith. For example, when the Germanic tribes began to convert to Christianity, a warrior Christ resonated with their beliefs of strong gods and goddesses and the value of heroism. The Heliand, a Saxon saga depicts Christ as warlike, stirring and heroic, triumphing over sin and death.

These threads of paganism are still present in Christianity. The feast of Saint Nicholas, on the 6th of December, was the day of the coming of Wodan, a god who would punish with a beating, or reward by leaving gifts in shoes left outside the door. Even today in Germany children clean their shoes, leave them by the door and wait for Saint Nicholas to come with chocolate or a rod depending on whether they have been good or bad. The goddess Hel resided in an underworld place for the dead, while the goddess Eastre, whose symbols were eggs, gave us our word Easter. The connections continue. Whether it was Graeco-Roman, Germanic or Celt, Europe integrated its paganism with its newfound Christian understanding.

The roots of Halloween

So where are the roots of Halloween to be found? The Celts celebrated their New Year on 1 November with the festival Samhain (pronounced sow-in), Gaelic for 'summer's end'. The beginning of the Celtic day was at dusk so Samhain actually began on 31 October. The Celts saw this as a sacred time when the veil between the worlds of the dead and living was so thin that the dead returned on that night. Some of the rituals and festivities included:

We can see clearly where pumpkin lanterns, the night of misrule, trick or treating and apple bobbing come from, as well as the custom of bonfires at this time of year. As people started to convert to Christianity, they were reluctant to give up the ancient traditions that gave a focus to the seasonal cycles and an opportunity for festivity in the midst of life's struggles. Christianity also recognised the importance of the themes of remembering the dead, family and community that Samhain contained.Wessels compares missionaries working during the conversion of pagan Europe. One group sought to abolish all pagan beliefs and ritual, deeming them evil. Another set out to transform such beliefs, taking those that resonated with Christianity and discarding those which were opposed. We can see this process at work in the history of Halloween.

In 837 CE Pope Gregory IV moved All Saints Day from May to 1 November thus providing a focus for people's celebrations. Around 100 years later in France, All Souls – a day to remember those who had died – was added on 2 November and quickly spread throughout the rest of Europe. The old English word for saint was 'Hallow', so 31 October became All Hallows Eve, then Hallow'en until eventually today's Halloween.

A Medieval custom of 'Souling' is also easily identifiable as early trick-or-treating. The poor children would go from door to door in their local community requesting alms and offering to pray for the dead. Households would often light a candle in their window to remember loved ones who had passed away and show that they were mourning so those who were 'souling' knew to stop there. Soul cakes were customarily offered to the intercessors which were spiced breads with a cross on top (origin of hot crossed buns!) as well as gifts of wine or ale. Much like 'caroling' 'souling' is a prayerful moving feast of rememberance.

How can we reclaim this ancient festival?

What about inviting others into the worship space where we will remember those who have died? Or to the contemplative celebration of the communion of Saints?

Explore the transforming power of darkness rather than equate it with evil. It is often in the most difficult and dark times that we mature and deepen our relationship with God.

Take this as an invitation to focus on the heroes and heroines of the Christian faith, those who have served God in a variety of ways (not just the famous). Perhaps spending some time with some of the Holy Hermits Stories and picking one to give thanks for (or dress up as).

Perhaps the theme of turning convention upside down, a strong theme in Jesus' ministry, could be explored?

Sharing resources with those who knock on your door trick-or-treating so that they are gifted with the light of Christ as well as a sweet treat could be a gentle way of sharing your faith with your neighbourhood - afterall they have come to you... there are some printable downloads below and you may also like to investigate Soul cakes as a treat to hand out.

Wherever your journey takes you in seeking to transform Halloween into a help rather than a hindrance, remember that there is no need to be afraid because, as Paul says, nothing can separate us from the love of God (Romans 8.35-39).

Roots on the Web

Luminous Wisdom of Night: Reflections on All Saints and All Souls by Christine Paintner