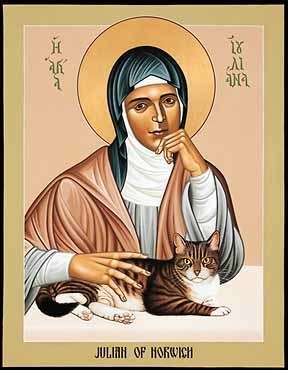 Julian (her birth name is unknown) was born in Norwich, England in 1342. In 1373 she contracted the Black Death, which had been sweeping England and Europe for some time. A priest attended to administer the last rites to Julian, and in a state near death, she experienced a series of 16 visions while staring at a crucifix held by the priest. Immediately following her illness she wrote a short text about her miraculous recovery, and later, in about 1394, wrote a longer text describing her visions and spiritual revelations during her illness called Revelations of Divine Love, which was to become the first book in the English language known to have been written by a woman.

Following her recovery, she chose to become secluded as an anchoress at the church of St Julian in Norwich, enclosed in a small cell measuring about 100 square feet (9.3 square metres), adopting the name Julian. The cell had a window into the church to allow her to receive the Eucharist at the Church Mass, and a window to the street to allow spiritual counselling for visitors, and one to communicate with her servant who brought her food.  She also had a small, enclosed garden.

Julian’s lifestyle of prayer and contemplation was informed by the Ancrene Rywle, a 13th century guidebook for anchoresses. Prayer times were set for seven different times throughout the day and night. Other rules included that her clothing was to be plain, warm and well-made, and her shoes were to be soft and warm in winter. She was not to wear a ring or brooch, striped girdle or gloves. When her parlour window was open, she was hidden from view by a curtain. She could not send or receive letters, and when people came to her for counsel, she was obliged to keep their confidences. She was, however, allowed to have a cat to keep vermin at bay.

It is believed that she developed a close relationship with her cat, and she is known as both the patron saint of contemplatives and of cats. It is said that Julian and her cat anchored the Light during one of the darkest periods of history.

In her revelations or “shewings”, Julian had new insights into the nature of God, particularly God’s warmth, closeness, tenderness and compassion. She showed optimism and hope in a time when the world was very much in need of these things.

One of her best-known revelations of hope was when the Lord said to her, “But all things shall be well, and all manner of things shall be well”.   Julian also increased her faith and trust in God, saying, “God is the still point at my centre”. Her time as an anchoress helped her develop a deep inner prayer life, reflecting, “For in the human soul is God’s true dwelling” as, “utterly at home, He lives in us forever”.

Another theme for Julian was the Motherhood of God, expressed in the characteristics of goodness, love and reliability. We are brought to life by God’s act of creation, and in Christ we are born again. Jesus as Mother nourishes us by giving his body and blood for our spiritual sustenance, and as Mother protects us from harm, teaches us, guides us, chastens us, comforts, forgives, and above all loves us.

Julian was not afraid to speak out as a woman about her experience with God at a time when women were not allowed a voice. In Revelations of Divine Love, she declared, “But because I am a woman, ought I therefore to believe that I should not tell you of the goodness of God, when I saw at that same time that it is His will that it be known?”

Mother Julian was the Holy Hermit who inspired our name. Her legacy of faithfulness in the face of the black plague and other political unrest was highlighted and celebrated during the covid-19 pandemic as a source of encouragement for all who found themselves isolated and living in lock-down.

As well as celebrating her at Sunday worship we have also held contemplative services and studied the Revelations of Divine Love in our seasonal study during 2021. You can check these resources out below:

Some other links to resources:

Revelations of Divine Love by Julian of Norwich (FULL Audiobook)

More information about Julian can be found at: https://julianofnorwich.org/

This page has been researched and prepared by Fleur.