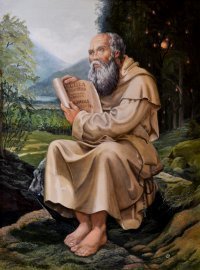 Eusebius is celebrated as the founder of the order of St Paul the first hermit.

Here is the website of the order of St Paul the first hermit in Australia.

Eusebius was born around 1200CE to a family connected to the Hungarian royal court. At an early age he professed faith and devotion in Christ and was ordained priest in Esztergom where he ministered with the poor. He was made a cannon and wrote books in his spare time, none of which survive today.

During his ministry with the poor, he forged relationahip with some hermits who lived in the nearby Pilis mountains. He was inspired to be a hermit himself but was delayed due to the invasion of the Mongols through Europe and stayed in his post to help rebuild the country.

In 1246 he recieved permission from his Bishop to become a hermit, and began living in a cave in solitude. He then felt called by God to gather a community of hermits together. This call was recorded as a direct divine instruction in these words: "Eusebius, summon all the hermits and found a monastic community. The love present in each will be the bond that will unite you and enable each to give loving service.”

He succeeded in gathering all those who were already living the hermetic lifestyle in Hungary and offered his leadership by setting order for community life.

The rule for living was said to be strict and family members and friends of those called to the monastic life under Eusebius often tried to dissuade them from joining up. These words are recorded as Eusebius response, "Christ loved his mother very much, but with his suffering his mother was tormented by the pain of his pain. He could have got off the cross, but he did not do it because he had fulfilled the will of his Heavenly Father. Likewise, we do not want to get off the cross of penance because people cry for us."

At his death on the 20th of January in 1270, he had founded and guided 16 monasteries. Later there were 150 communities living with his rules as guide and the rule was recognised by Rome in 1300.

Here is another summary of his life story on the Penrose park shrine website which is ministered by the Order of St Paul the first Hermit in NSW Australia.