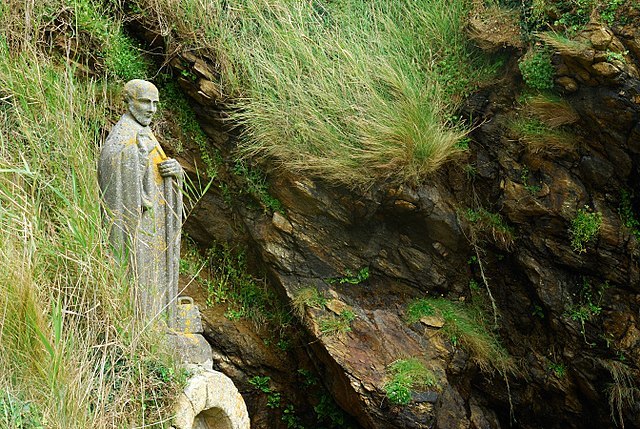 Gildas was renowned for his Biblical knowledge and literary style, and is one of the best-documented figures of the Christian church in the British Isles in the sub-Roman period. He was born the son of a royal family in what is now Scotland, and was educated at a monastic centre where he renounced his royal heritage and embraced monasticism. He became a teacher and converted many to Christianity, founding churches and monasteries throughout Britain and Ireland.

After a pilgrimage to Rome, Gildas emigrated to Brittany where he lived as a hermit, but eventually his students sought him out, begging him to teach them. Ten years after leaving Britain he wrote De Excidio Britanniae, criticising British rulers and encouraging them to embrace the Christian faith. Gildas died at Rhuys on 29 January 570, and his body was placed on a boat and allowed to drift, according to his wishes.

Gildas is also credited with a hymn called the Lorica or Breastplate, a prayer for deliverance from evil.

The Lorica of Gildas

Help unity of trinity, have pity trinity of unity;

Help me, I pray, thus placed as in the peril of a great sea,

So that the plague of this year draw me not with it, nor the vanity of the world.

May thrones, powers, archangels, principalities, dominions, angels,  defend me with their thick array, and be strong to overthrow my enemies.

Then also the other arbiters of the strife----patriarchs four, prophets four, Apostles, watchmen of the ship of Christ, And the athlete martyrs all----I ask,  And adjure also all virgins, faithful widows, and confessors,  that safety compass me by them, and every evil perish from me.

May Christ make with me a strong covenant,  He whose terror scares away the foul throngs.

[The end of the First Prologue, of grades of angels and patriarchs, apostles and martyrs with Christ. Beginning of the Second Prologue, respecting all parts of the body down to the knees.]

God the unconquerable guardian, defend me on every side by thy power.

Free Thou all limbs of mine, with Thy safe shield protecting each,  so that the fell demons brandish not against my sides, as is their wont, their darts.

Skull, head, hair and eyes, forehead, tongue, teeth and their covering,  neck, breast, side, bowels, waist, buttocks and both hands.

For the crown of my head with its hair, be Thou the helmet of salvation on the head;  For forehead, eyes, triform brain, nose, lip, face, temple, For chin, beard, eye-brows, ears, cheeks, lower cheeks, internasal, nostrils,  For the pupils, irides, eyelashes, eyelids, chin, breathing, cheeks, jaws,  For teeth, tongue, mouth, throat, uvula, windpipe, bottom of tongue, nape,  For the middle of the head, for cartilage, neck---- Thou kind One, be near for defence.

[I pray Thee, Lord Jesus Christ, by the Nine Orders of holy angels,]

Lord be Thou safest lorica, for my limbs, for my entrails, that thou mayest thrust back from me the invisible nails of stakes, which enemies fashion.

Cover elbows with elbow-joints and hands, fists, palms, fingers with their nails.

Cover back-bone and ribs with their joints, hind-parts, back, nerves and bones.

Cover surface, blood and kidneys, haunches, buttocks with the thighs.

Cover ankles, shins and heels, legs, feet with the rests of the soles.

Cover the branches that grow ten together, with the toes with the nails ten.

Cover belly, reins, genitals, and paunch, and vital parts also of the heart.

Cover the triangular liver and fat, spleen, armpits with covering.

Cover stomach, chest with the lungs, veins, sinews, gall-bladder with......

Cover flesh, groin with the inner parts, spleen with the winding intestines.

Cover bladder, fat and all the numberless orders of joints.

Cover hairs, and the rest of my limbs, whose names, may be, I have passed by.

Cover me all in all with my five senses, and with the ten doors formed (for me),  so that, from my soles to the top of the head, in no member, without within, may I be sick;  that, from my body, life be not cast out by plague, fever, weakness, suffering,  Until, with the gift of old age from God, I blot out my sins with good works; And, in departing from the flesh, be free from stain, and be able to fly to the heights,  and, by the mercy of God, be borne in joy to the heavenly cool retreats of His kingdom.