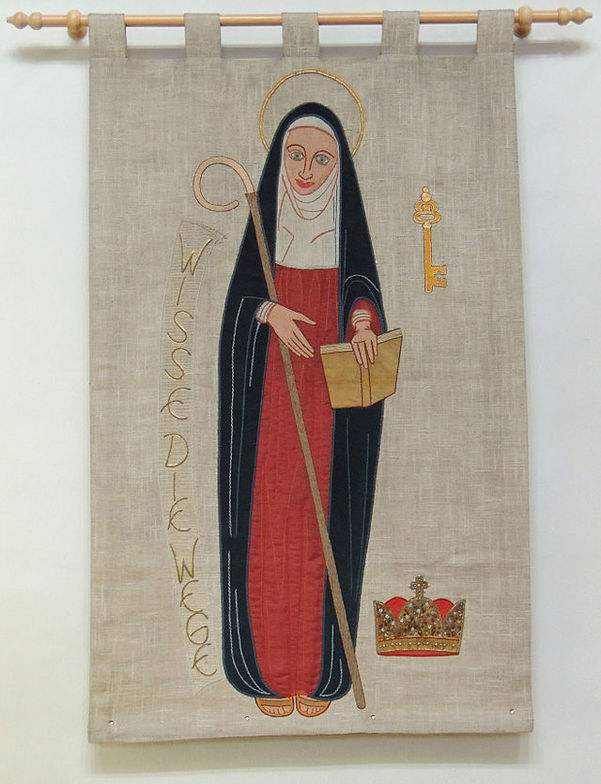 St. Hildegard, also known as St. Hildegard of Bingen and Sibyl of the Rhine, is a Doctor of the Church. She was also a writer, composer, philosopher, Christian mystic, and German Benedictine abbess.

She was born around 1098 to a noble family as the youngest of ten children. Her parents had promised their sick daughter to God, so they placed her in care of a Benedictine nun, Blessed Jutta, in the Diocese of Speyer at 8-years-old. She was taught how to read and sing the Latin psalms. Her holiness and strong piety made her adored by all who met her. It is said, from this young age, Hildegard began experiencing her visions.

When Hildegard turned 18, she became a Benedictine nun at the Monastery of St. Disibodenberg. After Jutta died in 1136, Hildegard was elected superior. Her unique nature and strong devotion to the Holy Spirit attracted many novices to the convent. The rapid growth alarmed Hildegard. She soon moved on with eighteen other sisters to found a new Benedictine house near Bingen in 1148 and later establish a convent in Eibingen in 1165. She believed this was Divine command.

Hildegard quickly became recognized for her immense knowledge of all things faithful, music and natural science, with knowledge of herbs and medicinal arts, despite never having any formal education and not knowing how to write.  Much of her insight is believed to have been communicated by God himself through her frequent visions.

At first, Hildegard did not want to make her visions public, but she would confide in her spiritual director. He passed on the knowledge to his abbot, who decided to assign a monk to document everything Hildegard saw. Her accounts were later submitted to the bishop, who acknowledged them as being truly from God. Her visions were then brought to Pope Eugenius III with a favorable conclusion. Hildegard's fame began to spread all throughout Europe. People traveled near and far to hear her speak and to seek help from her, even those who were not common people paid Hildegard a visit.

For remainder of her life, Hildegard continued her writings. Her principle work is called Scivias. Twenty-six of her visions and their meanings are recorded. Hildegarde wrote on many other subjects, too. Her works included commentaries on the Gospels, the Athanasian Creed, and the Rule of St. Benedict, as well as Lives of the Saints and a medical work on the well-being of the body.

The last year of St. Hildegard's life was difficult for her and her convent. Going against the wishes of diocesan authorities, Hildegard refused to remove the body of a young man buried in the cemetery attached to her convent. The boy had previously been excommunicated, but since he received his last sacraments before dying, Hildegard felt he had been reconciled to the Church. Her actions forced her convent to be placed under an interdict by the Bishop and chapter of Mainz. Months would pass before the interdict was lifted and Hildegard died on September 17, 1179, before the interdict was lifted. She was buried in the church of Rupertsburg.

When the convent was destroyed in 1632, her relics were moved to Cologne and then to Eibingen. After her death, she became even more venerated than she was in her life.  St. Hildegard became one of the first people the Roman canonization process was officially applied to. It took quite some time in the beginning stages, so she remained beatified.

On May 10, 2012, Pope Benedict XVI gave St. Hildegard an equivalent canonization, and laid down the groundwork for naming her a Doctor of the Church. Five months later, she officially became a Doctor of the Church, making her the fourth woman of 35 saints to be given that title by the Roman Catholic Church. Pope Benedict XVI called Hildegard, "perennially relevant" and "an authentic teacher of theology and a profound scholar of natural science and music." She is considered a patron saint of musicians and writers.

"When the words come, they are merely empty shells without the music. They live as they are sung, for the words are the body and the music the spirit."

"When the words come, they are merely empty shells without the music. They live as they are sung, for the words are the body and the music the spirit."

"Like billowing clouds, Like the incessant gurgle of the brook, The longing of the spirit can never be stilled."

"I am the fiery life of the essence of God; I am the flame above the beauty in the fields; I shine in the waters; I burn in the sun, the moon, and the stars. And with the airy wind, I quicken all things vitally by an unseen, all-sustaining life."

"Humanity, take a good look at yourself. Inside, you've got heaven and earth, and all of creation. You're a world—everything is hidden in you."

"The Word is living, being, spirit, all verdant greening, all creativity."

"I, a mere female and fragile vessel, speak these things not from me but from a serene Light."

"Humankind, full of all creative possibilities, is God's work. Humankind alone is called to assist God. Humankind is called to co-create. With nature's help, humankind can set into creation all that is necessary and life-sustaining."

"All of creation is a song of praise to God. Love abounds in all things, excels from the depths to beyond the stars, is lovingly disposed to all things."

"Give man a dog for the health of his soul."

All living creatures are sparks from the radiation of God's brilliance, emerging from God like the rays of the sun."

More sayings at The 30 Best Saint Hildegard Of Bingen Quotes From The Visionary Abbess (kidadl.com)