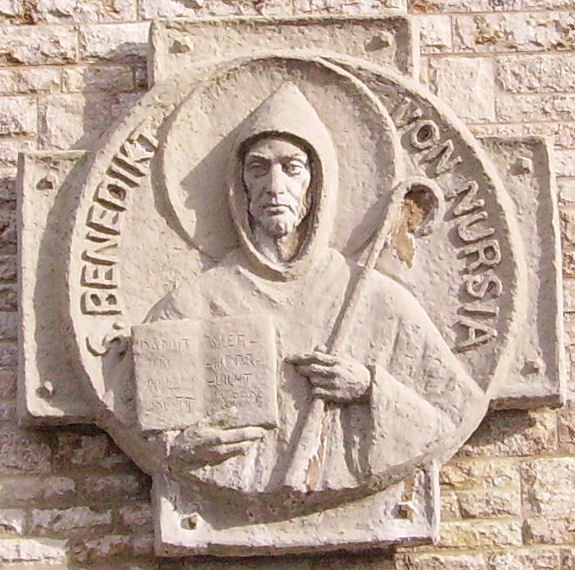 St Benedict is known as the father of Western monasticism, with his Rule of monastic life becoming the norm for monastic living throughout Europe.

Benedict was born in Norcia (Nursia) in 480CE, as a youth travelling to Rome to study literature and law. Benedict was shocked by the licentiousness of the city, fleeing to a cave in the rocks beside a lake east of Rome, where he received spiritual guidance and was provided with food and clothing by Romanus, a monk from one of the nearby monasteries. After some years people started to follow his teachings, and he was encouraged to become abbot of one of the monasteries, but his reforms were resisted there, and an attempt was made to poison him, so he returned to his cave for a time. Eventually he established 12 monasteries in the area, before travelling south to Monte Cassino where he settled, converting many pagans in the area. His twin sister, Scholastica, joined him and became head of a nearby nunnery.

St Benedict began his monastic life as a hermit but saw the spiritual difficulties of a solitary life, even though he saw its value for a mature spirit. The Rule of St Benedict focuses on a life spent in community, and the ordering of that life. Ownership of even the smallest thing is forbidden, and the ordering of the offices for the canonical hours of the day are laid down with precision. St Benedict’s instructions on humility, silence and obedience are still followed today by monastic communities. St Benedict displayed moderation in that monks’ clothing should be suited to the climate, they were to have sufficient food unless specifically fasting, and they were to have balanced times of prayer, manual work, Scripture reading, and also sufficient sleep. He also made allowances according to age, ability and disposition, allowing for weakness and failure.

In one story of Benedict's life, a poor man came to the monastery begging for a little oil. Although Benedict commanded that the oil be given, the cellarer refused -- because there was only a tiny bit of oil left. If the cellarer gave any oil as alms there would be none for the monastery. Angry at this distrust of God's providence, Benedict knelt down to pray. As he prayed a bubbling sound came from inside the oil jar. The monks watched in fascination as oil from God filled the vessel so completely that it overflowed, leaked out beneath the lid and finally pushed the cover off, cascading out on to the floor.

St Benedict encouraged his followers to practice sacred reading for four to six hours per day. In Chapter 48 of the Rule, St. Benedict instructs us that “idleness is the enemy of the soul; and therefore, the community ought to be employed in manual labour at certain times, at others, in divine reading.”

Lectio Divina is Latin for Divine Reading. It is a traditional Benedictine practice of scriptural reading, meditation, and prayer intended to promote communion with God and to increase the knowledge of God’s Word. The practice is described as follows:

1. Lectio Read the text slowly and prayerfully, constantly listening for that word that God has prepared for you. You may want to re-read the same text multiple times to help quiet yourself internally and focus on God’s voice. Listen and receive the Word that God speaks to you.

3. Oratio Prayer is your response to God’s word. It begins your dialogue with God. What do you want to say to the Lord in response to the Word spoken to you? Enter into this loving conversation with God.

4. Contemplatio Rest in God’s presence and receive His transforming embrace. Sit still with God, realising that in this deep and profound relationship, words are not necessary. Be content and at peace with a wordless, quiet rest in God, which brings joy to the heart. Remember that contemplation is not your action or doing, rather it is allowing God to act in you.

5. Finish this moment of rest with a short prayer of thanksgiving. Commit yourself to be a better person and to apply the words of the Scriptures into your life.

Here is a 10 minute meditation on St Benedicts Rule on Youtube: Benedictine Rule of Life - A 10 Minute Meditation with Ed Jansen

This page has been put together by Fleur, and the Contemplative services curation team.