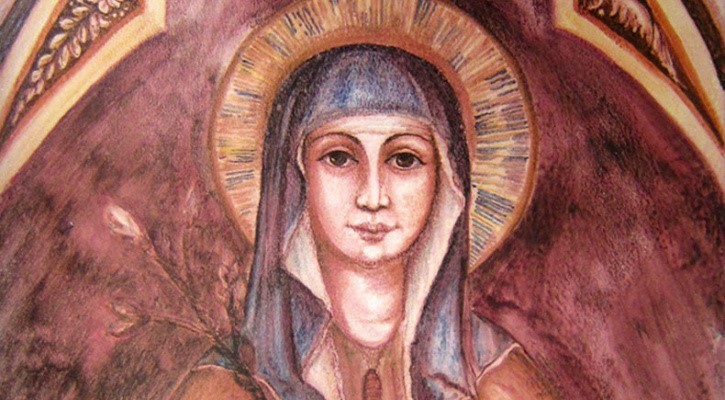 The story goes that she was given the name Clare (Chiara) because of the comfort the Holy Spirit provided her mother during the difficult labour. She believed that she would give birth to “a light that will…shine brilliantly in the world”.

When Clare was eighteen she heard Francis preach during Lent, and not long after, on Palm Sunday, 20 March 1212, she ran away from home to become one of his first followers. At first, Francis tried sending her to a Benedictine monastery, but her father found her and tried to force her to return home. She clung to the altar and refused. Francis then sent her to a more secluded monastery, but he eventually granted her wish for solitude and had a small dwelling built next to his church. Eventually two of her sisters and later in life, her mother joined her, along with other women.

At the age of twenty-one, Francis made her abbess of what was originally known as the Order of Poor Ladies, who honoured the same traditions as the Franciscans, living lives of poverty, austerity and seclusion from the world. The Poor Ladies ate no meat, slept on the ground, went barefoot and observed almost complete silence. She held this position for forty years. She also wrote the Rule of Life for what became known as the Poor Clares, which was the first set of monastic guidelines to have been written by a woman. She looked after the sick and washed the feet of the begging nuns, as they owned nothing individually or in common, and lived on contributions.

“Place your mind before the mirror of eternity! Place your soul in the brilliance of glory! Place your heart in the figure of the divine substance! And transform your entire being into the image of the Godhead itself through contemplation.”

“We become what we love and who we love shapes what we become. If we love things, we become a thing. If we love nothing, we become nothing. Imitation is not a literal mimicking of Christ, rather it means becoming the image of the beloved, an image disclosed through transformation. This means we are to become vessels of God’s compassionate love for others.”

“Our labour here is brief, but the reward is eternal. Do not be disturbed by the clamour of the world, which passes like a shadow. Do not let false delights of a deceptive world deceive you.”

Clare is the patron saint of embroiderers, gold workers, laundry workers and those suffering from eye diseases.

She is also the patron saint to television because she is believed to have seen an image of the mass on the wall of her sickroom.