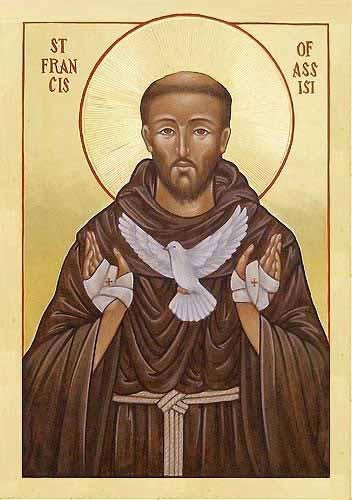 Francis was born Giovanni di Pietro di Bernardone, the son of a rich Italian cloth merchant and a beautiful Frenchwoman in 1182, and led a very worldly life in his early years. After fighting in a battle between Assisi and Perugia in 1202, he was caught and held captive for several months, which was followed by a period of illness during which he began receiving visions and heard the voice of Christ saying, “Francis, repair my church”. Although it took him some time to understand what this meant, he turned to prayer and service to the poor, in 1206 publicly renouncing his father’s wealth and becoming a hermit. People started to follow him in his simple life, practicing true equality by showing honour, respect and love to every person, including lepers and thieves.

Pope Innocent III approved his way of life, ordained him a deacon, and Francis’ followers increased. In collaboration with Clare of Assisi (1194 - 1253), he established a branch of his order for women, called the Poor Clares. In 1221 a lay order for men and women was founded named the Third Order.

He attended the Crusades, and on his return, retired to a life of contemplation, during which time he received the Stigmata, making him the first known person to receive such holy markings, which he retained until his death. He also composed the poem the ‘Canticle of Brother Sun’ at this time.

During his life Francis also developed a deep love for nature and for all creatures, and is known as the patron saint of the environment and of animals.

One day while Francis was travelling with some companions, they came upon a place where birds filled the trees on either side of the road. Francis told his companions to “wait for me while I go to preach to my sisters the birds”. The birds surrounded him, and not one flew away. He is often portrayed with a bird, often in his hand. It is a popular practice on his feast day, 4 October, for people to bring their pets and other animals to church for a blessing.

Some of St Francis’ Teachings

“There is no use in walking anywhere to preach if your walking isn’t your preaching.”

“We have been called to heal wounds, to unite what has fallen apart, and to bring home those who have lost their way.”

“Start by doing what’s necessary; then do what’s possible, and suddenly you are doing the impossible.”

“The deeds you do may be the only sermon some persons will hear today.”

“While you are proclaiming peace with your lips, be careful to have it even more fully in your heart.”

“If a superior gives any order to one who is under him which is against that man’s conscience, although he do not obey it, yet he shall not be dismissed.”

Canticle of the Sun