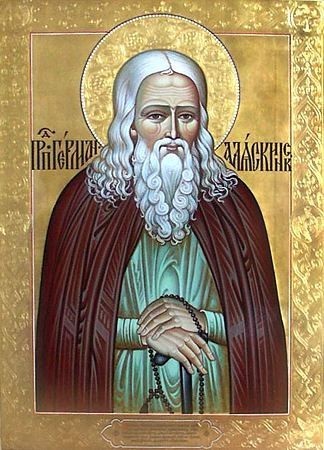 St Herman was born in Voronezh, Russia, in 1751 as Yegor Ivanovich Popov. At a young age he spent time with Father Varlaam, an elder and ascetic from the Sarov Monastery. By the age of twelve he was spending time in the wilderness, both with Father Varlaam and alone.

At the age of seventeen, Yegor was conscripted into military service, where he mostly worked in clerical duties. As a young man he developed a cancerous growth on his neck which grew to cover his whole face. He prayed unceasingly and fell before an icon of the Virgin Mary. After a night of prayer and tears, he wiped the face of the icon with a towel, and then wrapped the towel around his own face and fell asleep. During his sleep, he dreamt that he had been healed, and he woke to find this to be true. His disfigurement was completely gone.

In 1777 Yegor was released from the army and entered the Sarov monastery as a novice. In 1782, he received the name Herman when he was tonsured at the Valaam Monastery on Valiant Island, a place where he often withdrew into the wilderness to pray for days at a time. St Herman came from the Valaam Monastery to Alaska in 1794. He was one of a group of monks who had been requested by the Metropolitan Gabriel to travel to Alaska to bring the Gospel to the native Aleut people. At this time Alaska was in the possession of Russia.

Initially he stayed at Kodiak, administering the mission and establishing a school, but the monks came into conflict with the Russian authorities’ treatment of the natives. About 15 years later, St Herman moved to a small, densely wooded island off the coast called Spruce Island, where he lived a more hermit-like life. He built a church and a cell, planted a garden, started an orphanage and a school for people on the island, and lived in obedience to his monastic spiritual formation and Orthodox tradition, chanting the church services, contemplating Scripture, and pursuing an intense life of interior prayer.

St Herman died on Spruce Island in 1836, his face radiant with light. At the time of his death, inhabitants nearby saw a pillar of light rising above his hermitage. His last wish was to be buried on Spruce Island, but some of his disciples attempted to bury his remains at the church in Kodiak. A storm rose up and continued unabated until they abandoned the plan and buried him on Spruce Island. He became the first American saint and was canonized in 1970.

“From this day, from this hour, from this minute, let us strive to love God above all, and fulfill His holy will.”

He was once asked, “How do you live alone in the forest, Fr. Herman, don’t you become bored and lonely?” He replied, “No! I am not alone here. God is here, as God is everywhere. Holy angels are here. Can one become bored with them? With whom is converse better and more pleasant, with men or with angels? Of course, with angels!”

“A true Christian is made by faith and love toward Christ. Our sins do not in the least hinder our Christianity, according to the word of the Saviour Himself. He deigned to say: not the righteous have I come to call, but sinners to salvation; there is more joy in heaven over one who repents than over ninety righteous ones. Likewise concerning the sinful woman who touched His feet, He deigned to say to the Pharisee Simon: to one who has love, a great debt is forgiven, but from one who has no love, even a small debt will be demanded. From these judgments a Christian should bring himself to hope and joy, and not in the least accept an inflicted despair. Here one needs the shield of faith.” ― Letters of St. Herman of Alaska

You can read more about St Herman from these sources:

Here is a video of Pilgrimage by the Orthodox Church to Spruce Island in Alaska where St Herman is buried and venerated.

Here is a fabulous video for kids where St Hermans life is drawn and his story told.

Here is a writing from one of St Herman's letters:

"Without exalting myself to the rank of teacher, nonetheless, fulfilling my duty and obligation as an obedient servant for the benefit of my neighbor, I will speak my mind, founded on the commandments of Holy Scripture, to those who thirst and seek for their eternal heavenly homeland.

A true Christian is made by faith and love of Christ. Our sins do not in the least hinder our Christianity, according to the word of the Savior Himself. He said: I am not come to call the righteous, but sinners to repentance; there is more joy in heaven over one who repents than over ninety and nine just ones.

Likewise concerning the sinful woman who touched His feet, He said to the Pharisee Simon: to one who has love, a great debt is forgiven, but from one who has no love, even a small debt will be demanded. From these judgements a Christian should bring himself to hope and joy, and not in the least accept the torment of despair. Here one needs the shield of faith.

Sin, to one who loves God, is nothing other than an arrow from the enemy in battle. The true Christian is a warrior fighting his way through the regiments of the unseen enemy to his heavenly homeland.

According to the word of the Apostle, our homeland is in heaven; and about the warrior he says: we wrestle not against flesh and blood, but against principalities, against powers, against the rulers of the darkness of this world, against spiritual wickedness in high places (Eph.6: 12)].

The vain desires of this world separate us from our homeland; love of them and habit clothe our soul as if in a hideous garment. This is called by the Apostles the outward man. We, traveling on the journey of this life and calling on God to help us, ought to be divesting ourselves of this hideous garment and clothing ourselves in new desires, in a new love of the age to come, and thereby to receive knowledge of how near or how far we are from our heavenly homeland. But it is not possible to do this quickly; rather one must follow the example of sick people, who, wishing the desired health, do not leave off seeking means to cure themselves."

This page has been curated by Fleur.