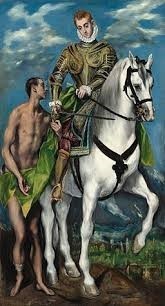 Martin was born in Pannonia, in what is now Hungary in 316 C.E. His father was a high-ranking Roman officer and his family lived wherever his father was posted, so he grew up in Ticinum in Northern Italy. Christianity had been legalised in the Roman Empire before Martin was born, and although his parents were pagans, he became a Christian at the age of ten. At fifteen he was required to follow his father into military service.

As a young soldier in Amiens where it was very cold, he met a beggar clothed only in rags, took off his cloak and cut it in two with his sword, giving half to the beggar and keeping half for himself. That night he had a vision of Christ saying, “Martin, a mere catechumen has clothed me”.

He then became the first recognised conscientious objector in recorded history, refusing to fight at a battle near Worms in Germany. He was accused of cowardice, but agreed to go into the battle unarmed. The opposing army declared a truce and no battle occurred. Martin was released from military service and dedicated himself to the service of Jesus Christ, studying with Hilary of Poitiers, and later travelling to Italy, along the way leading several people to Christ.

On a visit to Lombardy to see his parents, Martin was robbed in the mountains – but managed to convert one of the thieves. He was able to convert his mother - but not his father. He was also involved in countering the Arian heresy which denied the divinity of Jesus Christ. He was forced to flee and lived as a hermit on an island in the Adriatic temporarily, eventually returning to Tours to study again with Hilary. Hilary gave Martin some land at Ligugé in 361 and Martin became a hermit for ten years.

Other monks heard of his holiness and followed him, and a Benedictine monastery was established. (Ligugé Abbey was destroyed during the French Revolution, but was rebuilt in 1853.) In 371 Martin reluctantly became Bishop of Tours after declining, but being tricked into accepting the position. During his time in the role, he established a system of parishes, destroyed pagan temples, and won many to the Christian faith.

Martin missed the monastic life and lived in a hermit’s cell near Tours. As other monks joined him, this became the monastery at Marmoutier. He opposed the violent persecution of the Priscillianist sect of ascetics, although he did not agree with their views, and petitioned the emperor on their behalf, and also petitioned against civil interference in ecclesiastical matters. Martin died in Gaul in 397 C.E.

St Martin is attributed with many miracles, casting out of demons and convincing many pagans to renounce their beliefs and follow Jesus Christ. He often received visions, and on occasion even the Roman Emperor received visions regarding Martin!

St Martin is the patron saint of the poor, of soldiers, conscientious objectors, tailors and winemakers. His feast day is November 11.

His life story is known as it was written by one of his contemporaries, Sulpicius Severus, who knew him personally.

“Lord, if your people need me, I will not refuse the work. Your will be done.”

Refusing to go into armed battle “I am the soldier of Christ: it is not lawful for me to fight… I will take my stand unarmed before the line of battle tomorrow, and in the name of the Lord Jesus, protected by the sign of the cross, and not by shield or helmet, I will safely penetrate the ranks of the enemy.”

Before his death "Allow me, brothers, to look toward heaven rather than at the earth, so that my spirit may set on the right course when the time comes for me to go on my journey to the Lord."

You can read up on St Martin on Wikipedia.

Here's a great article in the anglican focus on his life and influence in chaplaincy.

Here is a video which is a short summary of his life.