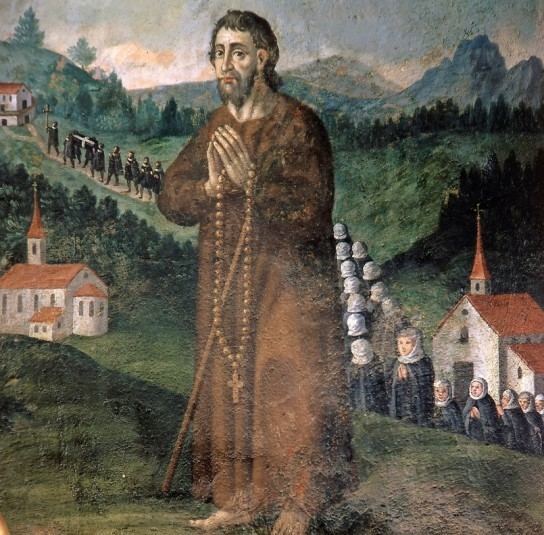 A prayer: Lord Jesus, we thank you for St Nicholas of Flue and for his example to the world as well as the Swiss people. May we, like him, bring our full-selves to your service, making use of our character, season of life and the gifts you have given each of us to bring about your purposes. Help us to overcome the excuses we could use to justify ourselves if we shy away from the hard work you call us to do. May we live as peacemakers and passionate companions on the road as Nicholas did. Amen.

Born on 21 March 1417 at Sachseln, Canton Unterwalden, Lake Lucerne, Switzerland and died on  21 March 1487 at Ranft, Aargau, Switzerland of natural causes;  his wife and children were at his side
His relics reside in the church of Sachseln, Switzerland.   He is affectionately known as Brother Klause.   Patronages – Switzerland, Pontifical Swiss Guards, Councillors, large families.   St Nicholas was a Swiss hermit and ascetic who is the patron saint of Switzerland.   He is sometimes invoked as Brother Klaus.   A husband and father, a Mystic, a writer, farmer, military leader, member of the assembly, councillor, judge, he was respected as a man of complete moral integrity.  Brother Klaus’s counsel to the Diet of Stans (1481) helped to prevent war between the Swiss cantons.

The Swiss affectionately call St.Nicholas of Flue “Brother Klaus.”   They revere him as a great holy man and political Councillors, who contributed significantly to the formation of their peace-loving nation.

From his youth in Unterwalden, Switzerland, Nicholas was a member of a Catholic lay association called the Friends of God.   Scattered throughout Switzerland, the Netherlands and Germany, members sought closeness to Christ through a disciplined life, especially by meditation on his passion.

Though totally dedicated to peace, twice patriotism led Nicholas to fight in wars to defend Unterwalden.   At age thirty he married Dorothy Wissling and during twenty happy years she bore him ten children.

At age fifty, however, Nicholas sensed God’s call to live a contemplative life as a hermit. Dorothy, also a member of the Friends of God, would not be opposed to such a desire.   She believed that Nicholas had a divine commission and she and the children released him.   So Nicholas left his family and spent the next twenty years in a remote cottage at Ranft.   He prayed most of the night but in afternoons he welcomed visitors.   It is reported but not confirmed, that during these years he took no food or drink, only Holy Communion.

In 1481, Nicholas played a major role in solidifying the unity of Switzerland.   After the cantons secured independence by defeating the German king, Charles the Bold, a dispute threatened to divide the cantons.   Representatives meeting at Stans disagreed over admitting Fribourg and Soleure to the confederation.   However, at an impasse they consulted Brother Klaus.   Within an hour after obtaining his advice, they agreed to include the territories.

A document from that period preserved Nicholas’s fundamental political wisdom.

“Always put God first and do not extend too widely the country’s frontiers that you may live more easily in peace, union and faithfulness to your dearly attained liberties.   Do not mix in the affairs of others or ally yourself with a powerful stranger.   Protect your country and do not hold yourself distant from it.   Do not let grow among you self-interest, jealousy, hatred, envy and factions, or these will work against you.   Dear friends, don’t let innovations and roguery seduce you.   Hold on to the good, all of you together.   Stay on the road in the footprints of your pious ancestors.   Guard faithfully that which has been assigned to you.   If you do that, neither storm nor tempest can harm you and you will overcome much evil."

Six years after the Stans meeting, on December 21, 1487, Nicholas died at Ranft after an illness of eight days.

St Nicholas was beatified in 1669.   After his beatification, the municipality of Sachseln built a church in his honour, where his body was interred.   He was canonised in 1947 by Pope Pius XII.

As a layman with family responsibilities who took his civic duties as an ancestral landowner seriously, Brother Klaus is a model of heroic manhood for many concerned with the flourishing of local communities and sustainable use of open land.   He is the patron saint of the German-language association KLB (Katholischen Landvolkbewegung), the Catholic Rural Communities Movement.

Writes Ana for the AnaStPaul site.

The Hermitary also have an indepth article on Nicholas.