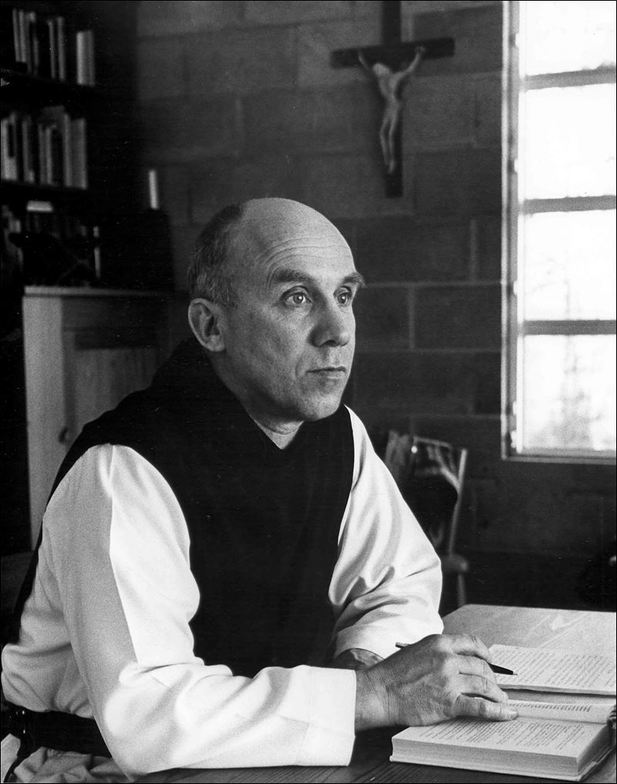 Thomas was born in Prades, in the French Pyrenees to a New Zealand-born father and an American-born mother who was a Quaker. Thomas’ wanted him to be baptised in the Church of England.  Unfortunately, both parents died when he was young, his mother when he was six years old, and his father ten years later. After some restless years, travelling between Alerica and France, Thomas converted to Roman Catholicism in 1939 while at Columbia University, and in 1941 arrived at the Abbey of Gethsemani in Kentucky, USA which was run by a strict order of Cistercian monks known as Trappists.

He believed himself to be a writer, and after his autobiography, ‘The Seven Storey Mountain’ was published in 1948, becoming a best-seller and increased the number of postulants joining monasteries across the country. When he found it difficult to write and maintain his other workload, eventually he was allowed to become a hermit, living in a remote corner of the property.

He spent 27 years at Gethsemani where he became the voice of social activism on issues regarding race, peace and civil rights, and in his later years, promoting East-West religious dialogue. He died during a trip to the Far East on December 10, 1968, on the 27th anniversary of his arrival at Gethsemani.

My Lord God, I have no idea where I am going. I do not see the road ahead of me. I cannot know for certain where it will end. nor do I really know myself, and the fact that I think I am following your will does not mean that I am actually doing so. But I believe that the desire to please you does in fact please you. And I hope I have that desire in all that I am doing. I hope that I will never do anything apart from that desire. And I know that if I do this you will lead me by the right road, though I may know nothing about it. Therefore will I trust you always though I may seem to be lost and in the shadow of death. I will not fear, for you are ever with me, and you will never leave me to face my perils alone.

“The Merton Prayer” from Thoughts in Solitude Copyright © 1956, 1958 by The Abbey of Our Lady of Gethsemani. Used by permission of Farrar Straus Giroux.

“The beginning of love is the will to let those we love be perfectly themselves, the resolution not to twist them to fit our own image. If in loving them we do not love what they are, but only their potential likeness to ourselves, then we do not love them: we only love the reflection of ourselves we find in them” ― Thomas Merton, No Man Is an Island

“Art enables us to find ourselves and lose ourselves at the same time.” ― Thomas Merton , No Man Is an Island

“Love is our true destiny. We do not find the meaning of life by ourselves alone - we find it with another.” ― Thomas Merton, Love and Living

“Our job is to love others without stopping to inquire whether or not they are worthy. That is not our business and, in fact, it is nobody's business. What we are asked to do is to love, and this love itself will render both ourselves and our neighbors worthy.” ― Thomas Merton

“The beginning of love is to let those we love be perfectly themselves, and not to twist them to... fit our own image. Otherwise we love only the reflection of ourselves we find in them.” ― Thomas Merton

“We thank Him less by words than by the serene happiness of silent acceptance. It is our emptiness in the presence of His reality, our silence in the presence of His infinitely rich silence, our joy in the bosom of the serene darkness in which His light holds us absorbed, it is all this that praises Him.” ― Thomas Merton, New Seeds of Contemplation

“The spiritual life is first of all a life. It is not merely something to be known and studied, it is to be lived.” ― Thomas Merton, Thoughts in Solitude

“Your life is shaped by the end you live for. You are made in the image of what you desire.” ― Thomas Merton