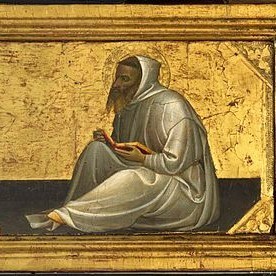 Born in Cologne, Germany in 1030, he studied theology in Rheims before returning home to be ordained in 1055. He became head of the school at Reims, leading the school until becoming chancellor of the diocese in 1075. He had a dream, however, of living in solitude and prayer, and persuaded some others to join him in a hermitage in the Chartreuse Mountains.

After living as a hermit for several years, Bruno was forced to leave to help a former pupil, now Pope Urban II, remaining in Italy until he was released to return. During this time he befriended a Count who granted Bruno and the monks some land “in the Chartreuse”, where the climate, terrain and inaccessibility guaranteed silence, poverty and small numbers.

Here he established the Carthusian Order, based on ascetism, poverty and prayer, combining the solitary life of hermits with the collective life of conventional monks. They built an oratory with small cells at a distance from each other. Monks met for Matins and Vespers each day, eating alone except for the great feasts and spending the rest of the time in solitude. Their main work was copying manuscripts.

Some statements for which he is remembered include:

“While the world changes, the cross stands firm”.

"Only those who have experienced the solitude and the silence of the wilderness can know the benefit and divine joy they bring to those who love them”.

“No act is charitable if it is not just”.

“By your work you show what you love and what you know”.

A two minute summary of his life can be read at Angelus Saint of the Day.

This Reflection comes from the Franciscan media site which also includes an audio of Bruno's story:

"If there is always a certain uneasy questioning of the contemplative life, there is an even greater puzzlement about the extremely penitential combination of community and hermit life lived by the Carthusians. May we mirror Bruno’s quest for holiness and unity with God."

Here are some YouTube links with some videos around Carthusian spirituality and living:

A Carthusian life - an inner journey