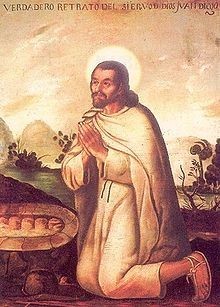 Born in Mexico in 1474, Juan was raised by an uncle in the Aztec pagan religion following the death of his father when he was three. Always interested in the mystical, when a group of Franciscan missionaries visited Mexico in 1524, Juan Diego and his wife, Maria Lucia converted to Catholicism.

He became a devout Christian, and on December 9, 1531, (two years after the death of his wife) he had his first vision of Mary, the mother of Jesus, who asked for a chapel to be built in the area in her honour. The bishop did not believe Juan Diego and asked for proof of his story. While searching for a priest to administer the Last Rites to his uncle, Mary appeared before Juan Diego again, telling him to gather roses and to take them to the bishop as a sign. She also said that his uncle would recover. Juan Diego took the roses that he picked in his cloak, and when he opened it to show the bishop, an imprint of Mary’s face became visible on the inside of his cloak. The bishop ordered the church to be built in honour of the Virgin Mary, and Juan returned home to find his uncle in good health.

From that time on, Juan Diego lived in a hermitage next to the church built in honour of Mary, praying and tending to the pilgrims who visited.

The cloak was put on display and the story of Mary’s appearance to Juan Diego caused thousands to convert to the Christian faith each day. During the Mexican revolutions, non-believers tried to destroy the cloak and image with an explosion. The building was badly damaged, but the pane of glass protecting the cloak was not even cracked.

In accepting the Christian message without forgoing his indigenous identity, Juan Diego discovered the profound truth of the new humanity, in which all are called to be children of God.

Here is the Bascillica's website where you can see how Juan's legacy is being lived out in community.

Here is an article about St Juan Diego.

Here is a video animation which tells his story for Children.

Here is another page with more resources.

Here is a travel Vlog explaining the importance and significance of the Basilica Our Lady of Guadalupe for the people of Mexico.