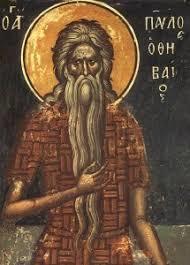 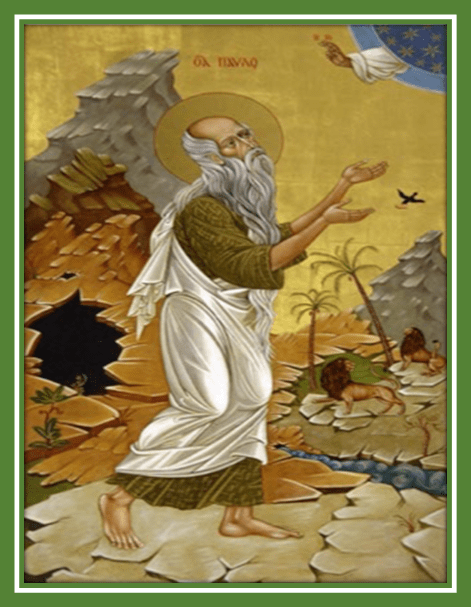 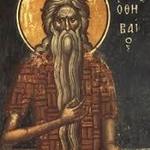 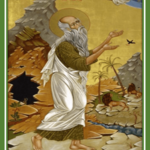 During the persecution of the Christians by Caesar Decius in 250, young Paul fled to the Desert in Thebes by the Red Sea and learned to enjoy his solitary life "alone with God alone" so much, that he remained there for the rest of his life. He lived nearly ninety years in prayerful solitude, constant penance, and contemplation of God. Before he died he was discovered by St Anthony the Abbot who spread the news about his holiness.

It is believed that St Paul was kept alive by the fruit of a palm tree and by a raven which daily brought him a piece of bread. He died at the age of 113, at which time, as related by St Anthony, two lions dug a grave for him.

Why St. Paul deserves our attention and devotion according to this Franciscan Media article:

After the persecutions ended, St. Paul could have left the desert, but he chose to stay because he had come to love prayer. It put him in God’s joyful, peaceful, compelling presence. In short, he found heaven on earth. Paul teaches us to persevere in our devotions. Eventually prayer will become more satisfying than we ever thought possible.

Lord Jesus, living in the desert was not St. Paul’s dream existence. And yet this curve in the road made him phenomenally content and happy. Through his intercession, help us accept life’s twists and turns. Then let us use them to glorify you. Amen.

Here is a short biography on Britannica.

Here is a longer account of his life by the Orthodox Church in America.

Here is an article using the original two sources for the life of Paul, the first Christian desert hermit: St. Jerome's The Life of Paul, First Christian Hermit; and a section of Jacobus de Voragine's The Golden Legend (1483) which have been translated for easy reading.