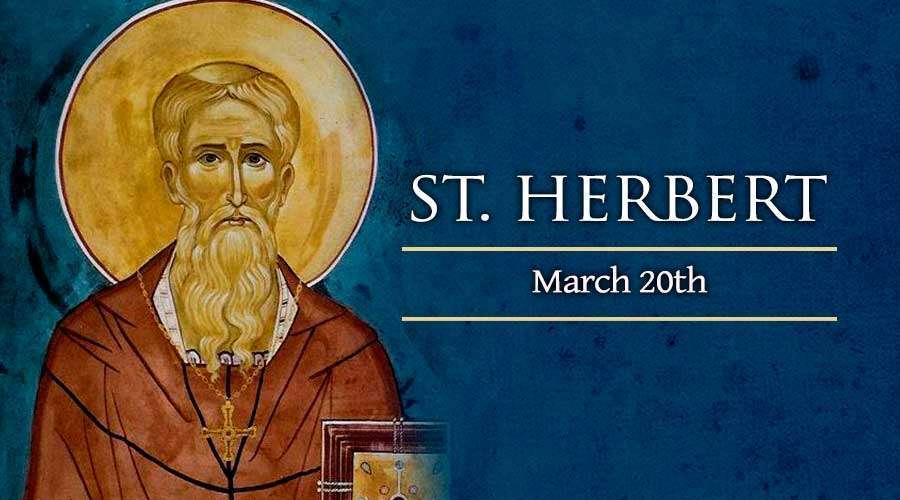 A prayer: God of friendship and all company. Thank you for St Herbert’s example of friendship with St Cuthbert. May we too be inspired to great friendship’s, where we journey together in faith and encourage one another by living as your disciples. Amen.

Little is known of Herbert of Derwent Water, a seventh-century hermit who lived on an island in the middle of the Cumbrian lake. But Herbert and the island named after him were the inspiration for writers as diverse as William Wordsworth and Beatrix Potter.

All we know of Herbert’s life comes from Bede’s History of the English Church and People (written around 731 AD) and Life of St. Cuthbert (720s AD)

Bede tells us that Herbert lived in prayer and solitude on an island in Derwent Water, but once a year would make a pilgrimage to Lindisfarne to visit his friend, St. Cuthbert.

One year, Cuthbert predicted that he would die before the year’s end (687 AD). Herbert was distraught, so Cuthbert petitioned God to allow them both to die at the same moment, so as to be reunited immediately in heaven. Miraculously, after returning to Derwent Water, Herbert died at the very same time as Cuthbert.

It is unclear when he was canonised, but the Anglo-Saxons celebrated Herbert’s Feast Day on 20th March.

Local tradition holds that the remains of Herbert’s tiny cell are visible on St. Herbert’s Isle, but the island’s scant stone ruins were more likely to have been erected as a folly by Sir Wilfrid Lawson (1795-1867).

William Wordsworth visited Derwentwater, and wrote a poem about the saint and the island named after him.

Possibly due to its associations with solitude, St. Herbert’s Isle was the inspiration for Beatrix Potter’s ‘Owl Island’, the home of the cantankerous and anti-social Old Brown in The Tale of Squirrel Nutkin.

Remarkably, though we know little of Herbert’s life, the Isle that bears his name ensures that this relatively-minor hermit is remembered in the modern day.

As well as inspiring some of England’s most famous writers, Herbert’s choice of Derwent Water to live an austere life of contemplation can offer a spiritual interpretation of the lake and its surroundings to visitors today.

Writes Tim Flight from the University of Oxford for the National Trust.