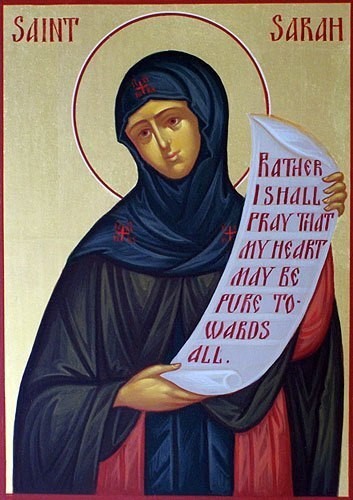 Amma Sarah of the Desert (5thC)

Amma (Mother) Sarah was one of the mothers of the desert, known only for few, but important recorded sayings in The Matericon and The Sayings of the Desert Fathers.

She is known because

1) she sought the approval of God alone,

2) she never asked for temptations to be removed, only for God to strengthen her to resist them,

3) she encouraged acts of charity, even if they weren’t for the right reasons, because she believed that God would work through them to make them to change the heart, and

4) she refused to be denigrated because she was a woman.

Not much is known about Sarah’s life, although she is believed to have been well-educated and literate. She was attracted to the ascetic life, wanting to be pure at heart so that she could be united with God, but in this pursuit she struggled with the desires of the flesh, particularly lust. She became a hermit living near a river, which was probably the Nile, for sixty years, connected to a nearby monastic community.

Most of what we know of Sarah comes from The Sayings of the Desert Fathers. Sarah’s sayings show that she challenged the gender roles of her time. An example was when in her old age, she was treated rudely by two old male anchorites:

Sarah also had things to say to women of her time, found in The Matericon:

A prayer that Amma Sarah wrote for the Sixth Hour, i.e., noon:

O Lord, You who have measured The heights and the earth In the hollow of your hand, And created the six-wing Seraphim To cry out to you with an unceasing voice Holy, Holy, Holy, Glory to your name. Deliver me From the mouth of the evil one, O Master. Forget my many evil deeds And through the multitude of your compassions Grant me daily forgiveness, For you are blessed unto the ages. Amen.

This page has been curated by Fleur using these sources:

Ward, B. (1984). The sayings of the Desert Fathers: The alphabetical collection. Cistercian Publications.