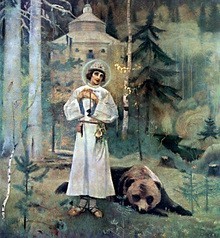 Sergius (baptised as Bartholomew) was born into a noble Russian family in Rostov in 1314. The family became impoverished and moved to the village of Radonezh about 1328. After the death of his parents, Sergius sought a secluded life, finding a place in the deep forest near the Marovets hill where he built a small cell and a chapel. His widowed older brother, Stephen, joined him for a time, but found the life difficult, so left to live in a monastery in Moscow.

Sergius lived alone for a number of years, surrounded by wild animals that did not harm him. Every day a bear came to visit him, and Sergius shared his bread with the bear. He was visited by the holy monk Mitrofan, from whose hands he received the tonsure, and the name Sergius. People learned of him and came to him for spiritual guidance, with monks eventually joining him resulting in the foundation of the hermitage of the Holy Trinity.

In 1345, the Trinity-Sergius Monastery was formed. As the settlement grew, Sergius sent his monks as disciples to spread the Gospel across central and northern Russia, with many new monasteries being established by these disciples often in some of the most uninhabitable locations. The Patriarch advised Sergius to implement a strict coenobic order, which implied a communal life for monks, which he did, setting the consuetudinary (rule of life), which was later implemented in many Russian monasteries.

On occasion he consulted with Princes and prayed for the outcomes of their battles. He was offered honours by the Patriarch of Constantinople, all of which he refused, preferring to live the ascetic life. He died on September 25, 1392.

Sergius’ community at Holy Trinity served as a model for secluded ascetic life in organised communities outside towns and cities.

He was committed to poverty and to sincerity.

He led by example, giving help to all who sought it, establishing monastery schools and teaching farmers better methods of farming.

He combined detachment from the world with sacrificial service for the common good.

Othodox Wiki celebrates that "He committed to giving help to all who sought his help with loving attention."

Here is a short article from Britannica on Sergius legacy.

The Greek Orthodox Archdiocese of America has some beautiful prayers after telling Sergius' story.

Here is a Russian Orthodox look at Sergius which names his last words to his followers: “above all things have a fear of God, a clean soul and unfeigned love.”

This Google page celebrates the Life and iconic sites of St. Sergius Radonezh.