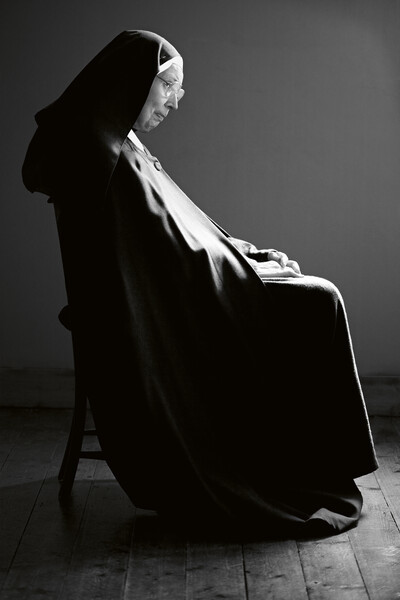 Wendy Mary Beckett was born on February 25, 1930, in South Africa, but raised in Edinburgh, Scotland, where her father was studying medicine. In 1946 she joined a Roman Catholic order of nuns devoted to education, the Sisters of Notre Dame de Namur. The convents maintained a strict code of silence at this time, prior to the Second Vatican Council (1962-65). Sister Wendy completed her novitiate in England where she enrolled at the University of Oxford, graduating with top honours in English literature in 1954, later followed by a teaching diploma in Liverpool. She then returned to South Africa, at first teaching English and Latin in a Catholic girls’ convent in Constantia, Cape Town, followed by a time lecturing at the University of the Witwatersrand in Johannesburg, where she was also appointed superior to the local convent.

In 1970 Sister Wendy returned to England due to ill-health and was granted papal permission to become a consecrated virgin and hermit. She initially lived in a caravan, on the grounds of a Carmelite monastery in Norfolk, which was later replaced by a mobile home. Her life was dedicated to solitude and prayer, with two hours per day of work to earn her living.

After spending some years translating Medieval Latin scripts, in 1980 Sister Wendy turned her interest to art, writing several books with the first published in 1988.

The BBC became interested in her in 1991, and commissioned her to present a television documentary on the National Gallery in London. This was so successful that it became a regular program, continuing until 2001, when due to her declining health, she withdrew for a life of solitude again, occasionally making appearances, while writing a number of books on both religion and religious art.

She donated all her earnings to the Carmelite order.

A musical called Postcards from God: The Sister Wendy Musical, was performed in England in 2007-08.

"God never sends suffering. Never. It is never "God's will" that we should suffer. God would like us not to suffer. But since the world brings suffering, and since God refuses to use His almighty power and treat us as foolish children, He aligns Himself with us, goes into Auschwitz with us, is devastated by 9/11 with us, and draws us with Him through it all into fulfillment. This is a high price to pay for our human freedom, but it is worth it. To be mere automatons for whom God arranges the world to cause us no suffering would mean we never have a self. We could not make choices."

"Scripture tells us that one of the great joys of entering heaven will be that God will call us by our name. In fact, God is the only one who really knows our name, the full dimensions of our name, because it is only He who knows us absolutely. We do not even know ourselves (but sometimes make unpleasant discoveries). But God knows us through and through; all of us, good and bad."

"We were created to be fully human - a lifetime effort - and using our minds intelligently and reverently is essential to full humanhood. But Rushdie talks throughout of making something sacred, whereas there is another kind of sacrality that exists of its own right."

"You are not a saint because you keep the rules and are blameless; you are a saint if you live in the real world, going out and loving the real people God has put into your life."

"There is no life without work, anxieties or tensions. Peace is not found in avoiding these but in understanding them and controlling their force."

"Looking at art is one way of listening to God."

"All great art is a visual form of prayer."

"Art that is not specifically religious expresses this truth: if we do not see the Lord everywhere, however unconsciously, we shall find it hard to recognize Him when we look into His face at prayer time."

"We know great art by its effect on us. If we are prepared to look without preconceptions, without defenses, without haste, then art will change us."

Here is an article in the anglican focus celebrating Sr Wendy.

The New York Times described her as "a sometime hermit who is fast on her way to becoming the most unlikely and famous art critic in the history of television."

Here is the BBC Four HD "Sister Wendy and the Art of the Gospel" (2012) Documentary where she shares part of her story and relates her faith through paintings of Jesus.

Here is the wikipedia page with information about her life and the list of her published works.

Here is one of the articles she wrote called the Art of looking at Art.