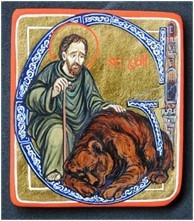 St Gall was born in about 550 C.E. in Northern Ireland and was educated at the monastery in Bangor. He became a disciple of St Columban and in 589 C.E. travelled with him and a group of other monks to Europe to spread Christianity, going first to France and then to Switzerland, where they stopped at Lake Constance.

Eventually, in 612 C.E. Columban wanted the group to move on to Italy, but Gall was ill with a fever, and also desired to spend some time in solitude. Gall found a quiet place on the River Steinach where he erected a stone cell for prayer, and after a time of solitude, prayer and fasting, Gall trained twelve other monks and cells were added for them to join him. They followed the Rule of St Columban, which was very strict, based upon absolute obedience, silence, fasting and abstinence. This was the beginning of the town and abbey of St Gall.

St Gall was known as a powerful preacher. He destroyed images to heathen gods and convinced people to turn to the true God. He is believed to have been responsible for most of Switzerland embracing the Christian faith.

A legend about St Gall tells how a bear became his sole/soul companion in the later years of his life, and that bear used to bring logs to him for his fire. The bear is now on the coat of arms for the town of St Gallen in Switzerland, and the bear carrying logs is depicted on the wall of the cathedral. At the local church on his feast day of 16th October it is a tradition for each member of the congregation to bring their teddy bear to church.

A Prayer for Missionaries and Thanks for Gall

We praise you, Lord, for witnesses through the ages who have told your story and made you real to the next generation. ​We thank you for people whose names are well known and prominent, and we thank you for those whose names are long lost in the annals of history – but who are known to you. ​We praise you for all whose good Christian lives have impacted on who we are, and what we are, and where we are. ​We especially thank you for St Gall and all those inspired by him to mission.​ We praise you that in every generation there are witnesses who stand out, who stand up to be counted, who make a difference to the Christian path. ​We praise you, Lord God, Father, Son and Holy Spirit, that we have been brought by word, by deed, by action to follow you. Amen.​

St. Gall’s Church, Carnalea, in Bangor County Down in Northern  Ireland Celebrates more of his story on their website.

He is celebrated on the City Desert ministry site and songs of praise are devoted to him alongside an Orthodox perspective of his story here.