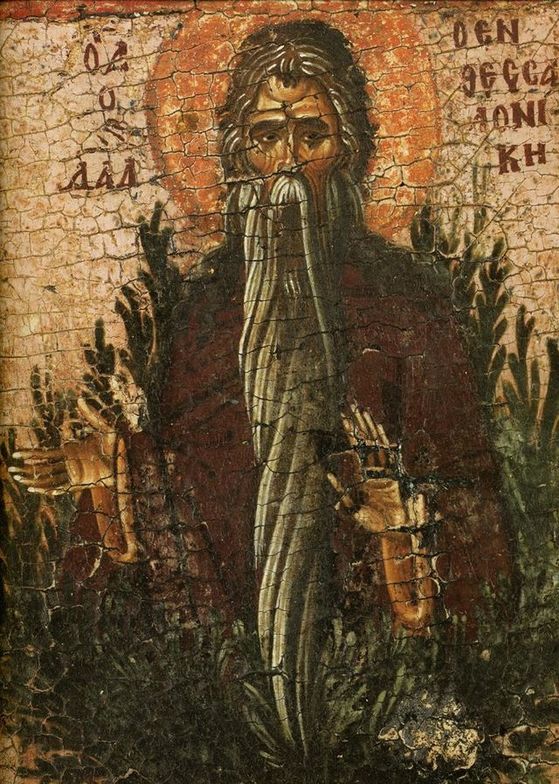 Originally from northern Mesopotamia, David became a monk at the Monastery of Saints Merkourios and Theodore outside Thessaloniki, sometime between 465 and 470. He was hounded for his words of wisdom and prayer, so fled by climbing up an almond tree, where he spent his time in quiet contemplation for three years, praying that the Lord would reveal His will to him, also granting him wisdom and humility.

During the three years, he endured the bitter cold of the winter, and the burning heat of the summer, fully exposed to the weather. Some say his deprivations were greater than those of the stylites, as the tree offered no rest due to its constant swaying in the high winds.

At the end of three years an angel of the Lord appeared, telling him that his prayers had been heard, that his time as a dendrite had ended, and that he would “accomplish one other act of great love”. He continued to live as a hermit in a cell, with many coming to him for prayer and healing.

Some time after 520, David left his cell for the first time in many years to travel to Constantinople to petition the Byzantine emperor, Justinian the Great, to protect Thessaloniki as capital, and from the threat of the barbarians. When Emperor Justinian saw him, he was impressed by his holy appearance, but before David spoke, he took a piece of coal with incense in his bare hands, and censed the Emperor and his Senate and his hand did not burn, although he prayed for over them for an hour. After this the Emperor acquiesced to David’s request to protect Thessaoniki.

On the return trip aboard the ship to Macedonia, David died, and was buried at the Monastery of Saints Theodore and Mercurius at his request. He is known as David the Dendrite (tree-dweller), and is celebrated on 26 June.

David the Dendrite on Wikipedia

From CityDesert: "David the Dendrite (died 540), also known as David the tree-dweller and David of Thessalonika, is a patron saint of Thessaloniki and a renowned holy fool. Originally from Mesopotamia, David became a monk at the Monastery of Saints Merkourios and Theodore outside Thessaloniki. Famed for his sound advice, crowds would hound him for words of wisdom and prayer. Wishing a quiet, contemplative life, David fled to the seclusion of an almond tree, where he lived for three years. He left the tree to petition the Byzantine emperor Justinian the Great in Constantinople to send soldiers to defend Thessaloniki from attack. David died in 540 as his ship was in route to Macedonia."

Here is a bigger account of his life including first accounts of David's story recorded as part of St John of Moschos in his writing The Spritual Meadow.

More on Dendrites from the CityDesert site.

This page has been put together by Fleur.