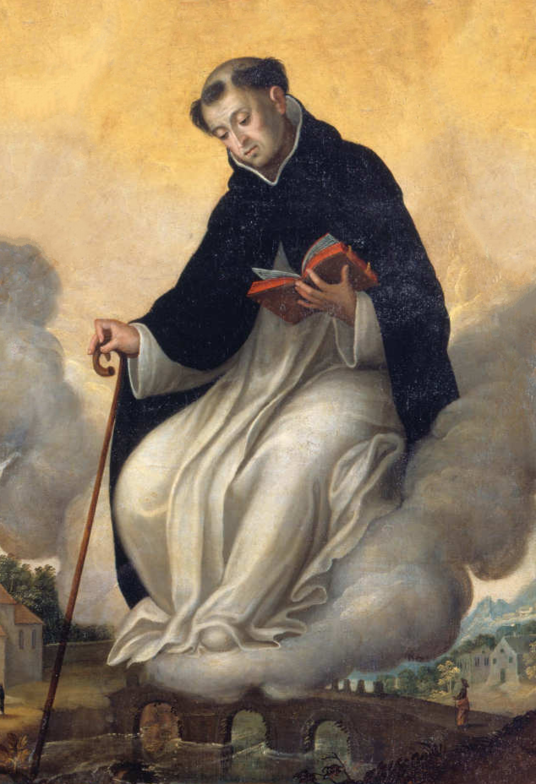 Known for his early devotion and piousness from childhood Gundisalvus (Gonsalvo, Gonzalas) was born in Portugal into a wealthy family in the 12th Century. Upon answering his call to a holy life he was ordained priest at a young age and appointed to a wealthy parish. The comfortable life was not for him though and he went on a long pilgrimage to the Holy Land leaving care of the parish to a nephew who was also a priest.

Upon returning after the 14 year pilgrimage and discerning that managing wealthy parishes was not his vocation, Gundisalvus retreated to the mountains of Amarante where pilgrims began to travel to learn from him and hear his preaching.

He is said to have lived prayerfully and with austerity as a hermit before seeking out the Domician friars who welcomed him to their order. After training and recieving his novitiate for some time, he returned to the Amarante hills to establish a house of prayer there in the Dominician way. He was renowned and beloved by the community who gathered around him as well as those who made the journey to find him and also said to have worked miracles.

One of the miracle stories is that he built a bridge, to enable more travelers to join him at his retreat, over a river in an impossible place.

Here is an article from the Catholic Saints directory which tells his story.

Here is the Wikipedia page with a brief account of Gundisalvus' life.

Here is a prayer we can say to inspire the same commitment to holy living in our own lives:

God of mercy and compassion, in your grace Blessed Gonsalvo came to love your holy name and served you in the solitary life. By the help of his prayer and the grace of the Spirit may we keep you in our thoughts and with burning zeal do what is pleasing to you. We ask this through our Lord Jesus Christ, your Son, who lives and reigns with you and the Holy Spirit, one God, for ever and ever. Amen.