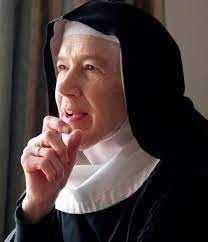 An English nun, writer and translator, born in Surrey to a Roman Catholic convert and his second wife, her mother’s early death made her responsible for her younger siblings at the age of sixteen. As a good student, Mary was offered a scholarship to Oxford, but she declined in favour of joining Stanbrook Abbey in Worcester in 1947, given the name Ethelburga, and taking solemn vows in April 1952. She described herself as “intellectually frustrated, stagnant and unhappy”, so the abbess encouraged her towards theology. Mary became an external student of the University of London, and was a staunch supporter of renewal and openness in the Church.

Her first book was published in 1973, entitled Contemplative Nuns - are they Wasting their Lives? when she returned to using the name Maria. She joined the theological commission of the English Benedictine Congregation in the late 1970’s, and published a number of books on monastic life. Although rarely appearing in public, she made a conference tour of the Holy Land, Australia and Japan in 1980, then lived as a hermit from 1985 to 2004 with her dog and her cat.

From 2004 until her death in 2009 she travelled and continued translating and revising, including a translation of The Confessions of St Augustine, before being diagnosed with cancer in 2008. She insisted that no Latin be read at her funeral in 2009.

“Prayer is a listening to the creative, life-giving word that loves us into being.”

“In today's world silence is in short supply; this is a serious problem for our society, and anything we can do to help people recover a sense of silence as a necessary and positive element in human life is a contribution to the general sanity.”

“Flesh is the turmoil of times of change. Flesh is the opaque, ambiguous, messy character of most of our human experience. And flesh is precisely where the paschal mystery operates.”

“In the lives of those who believe and pray, there are bleak winters of the spirit. We seem to go along well for a while in prayer and relationships and life generally, but from time to time we disintegrate. It is very painful. You may suspect that this will prove to be a creative disintegration, that God is re-creating you, putting you together in the likeness of his Son at a new and deeper level. Certainly this does happen: growth is not easy; there is a probably distressing period for the caterpillar on the way to butterflyhood. We are all participants in this experience from time to time, and a chrysalis needs sympathetic understanding, so we should be gentle and patient with ourselves, as with others. Nevertheless, they are hard to live through, these winters of the spirit. When you know yourself to be sterile, helpless, unable to deal creatively with your situation or change your own heart, you know your need for a Savior, and you know what Advent is. God brings us to these winters, these dreary times of deadness and emptiness of spirit, as truly as he brings winter after autumn, as a necessary step towards next spring. But while we are in them they feel like a real absence of God, or our absence from him… In the winters of your prayer, when there seems to be nothing but darkness and a situation of frozenness, hold on, wait for God. He will come.”

A blog reflecting on her Obituary from The Times