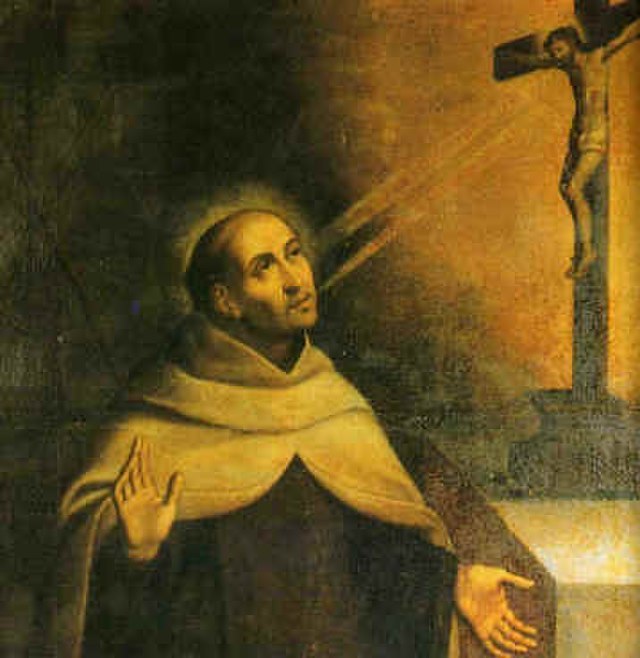 Saint John of the Cross was born Juan de Yepes y Alvarez, in Fontiveros, Avila, Spain, June 24, 1542 (died December 14, 1591, Ubeda, Spain).  One of the greatest Christian mystics and Spanish poets, doctor of the church, reformer of Spanish monasticism, and cofounder of the contemplative order of Discalced Carmelites.   He is a patron saint of mystics and contemplatives and of Spanish poets.  Canonized 1726. Feast day December 14th.

John became a Carmelite monk at Medina del Campo, Spain, in 1563 and was ordained priest in 1567. St. Teresa of Ávila, the celebrated mystic, enlisted his help (1568) in her restoration of Carmelite life to its original observance of austerity. A year later, at Duruelo, he opened the first Discalced Carmelite monastery.  Reform, however, caused friction within the order and led to his imprisonment, first in 1576 and again in 1577 at Toledo, where he wrote some of his finest poetry. Escaping in August 1578, he later won high office in the order, becoming vicar provincial of Andalusia from 1585 to 1587.

Near the end of his life, the Discalced Carmelites were again troubled by dissension, and he withdrew to absolute solitude. In 1591, John became ill with a skin condition that resulted in an infection. He died on December 14, 1591.

Shortly following his burial, there was a dispute over where he should be buried. The dispute was resolved by removing his legs and arms. Over the years, parts of his body were placed on display or buried across several places. Saint John of the Cross was beatified by Pope Clement X in 1675, and Canonized by Pope Benedict XIII in 1726.

"If you would ask, what is its essence –  This summit of all sense and knowing: It comes from the Divine Presence – The sudden sense of Him outflowing, In His great clemency bestowing The gift that leaves one knowing naught, Yet passing knowledge with their thought."

"The one who avoids prayer is avoiding all that is good."

"Seek by reading and you will find by meditating. Knock by praying, and it will be opened to you in contemplation."

"Strive to preserve your heart in peace; let no event of this world disturb it; reflect all that must come to an end."

"In the inner stillness where meditation leads, the Spirit secretly anoints the soul and heals our deepest wounds."

"I was sad one day and went for a walk; I sat in a field. A rabbit noticed my condition and came near. It often does not take more than that to help at times - to just be close to creatures who are so full of knowing, so full of love that they don’t - chat, they just gaze with their marvelous understanding."

Poems of St. John of the Cross